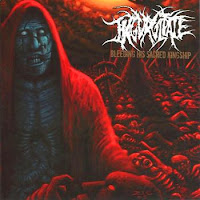 Because killing us all in the previous year wasn't enough for the Texans Ingurgitate, they decided they would exhume our now rested corpses, prop them up into some semblance of normal existence, and then brutally slaughter us all once more, this time with an even more densely focused narrative of uncomfortable brutality which excels in brickhouse pit rhythms far more than its predecessor, the loathsome lasso of Blackest Origins. The stops have been pulled out, the chainsaw taken off its hook in the shed and the targeted towards once more towards the constructive destruction of Christian imagery. I can only imagine the level of wanton confession this band would require to compensate for such an act as Bleeding His Sacred Kingship, but I don't really think they care. Better to rule in Hell, after all, right, pardner?

From the minute "I Have Created" issues forth from your speakers, those very same audio heralds will hate your guts, because Ingurgitate is so deep and disgusting here that they will rattle your rig apart at the very metallic and plastic seams. Truly, this is about as unfriendly as an album can get, with thick bass lines and darkened guitar tones that surge and thrust across the more brash performance of the drums. Like Devourment, the band can utter forth an ugly breakdown, but never dull, and I found the overall riffing skills superior as they rend and tear listener flesh like starving Satanic dire-buzzards. This album is even shorter than the debut, clocking in at a total of 22 minutes, but these are 22 minutes in which you will barely have time to break the surface of bloodied, shocked bodies as you drown in the viscera of "The Weight of Your Sins", "Whoreson" or the tense and tight "Twisting Prophetic Revelation".

The band rarely takes a break unless you're dealing with the shredded intro to "Only the Voiceless", or the haunting ambiance that alights "Consecration in Black Flames" or the bonus track "A Burial for the Exalted" (on the 2008 reissue through Ossuary Industries), but this is welcome, because Bleeding his Sacred Kingship is true to its sanguinary, blasphemous intentions, a slab of sheer entertainment that is so fun and energetic that it almost escapes any trace of criticism on those grounds alone. The riffs are better, the grooves better, and the sheer force of it will knock you out of your seat, and while the buck stops just below true greatness, after tossing the unfortunate rider, this is one of the finest individual death metal records I've heard out of Texas. Don't expect to lock horns with it and survive for long.