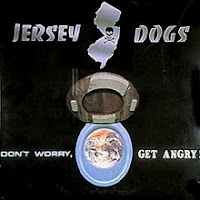 There's quite a lot to take in on the cover of the Jersey Dogs' debut EP Don't Worry, Get Angry, released through the small but striving Wild Rags imprint in 1989, when the thrash metal genre was in full stride and it was time to put up or shut up. Three separate fonts, including the horrible band logo. The Earth positioned as a toilet, as if to infer that the listener should take a massive poop on his home world. Last but not least, hovering above said toilet's seat, adorned with the poison symbol, an outline of New Jersey itself, one of the most vile and wretched hives of villainy in our entire universe, responsible for horrid reality TV programming, the lifeline of the 'Guido' personality type and other treacherous individuals like Bruce Springsteen and Jon Bon Jovi.

Hovering near such a large metropolitan nexus as New York City, and itself ridden with criminals, scum, toxic waste and other filth, New Jersey was actually prime territory for fostering an angry thrash metal band, and that is in fact the tree up which Jersey Dogs would climb in their brief career. This was essentially a stop gap for the rhythm section of the USPM act Attacker, and its career existed started after The Second Coming, coming to an end in the front end of the 90s, well before that band would resume its own path in the 21st century. Lou Ciarlo (bass, vocals), Mike Sabatini (drums) and Mike Benetatos (guitar) form the meaty core of this act, a pretty straight city thrash act with some similarities to fellow urbanites Blood Feast, Gothic Slam and the skimpy Slaughter House.

The dogs keep their introduction short and tight, leading in with an ironic intro and then into the slamming rhythms of "Wasted World" which instantly recounts Sacred Reich's debut Ignorance. In fact, though they carry a slightly less bulky, more sleazy tone, the vocals even sound similar, but it matters little when you can head bang this hard to something. The music is hardly intricate nor even that well written, but the thick guitars and grounded drum work could easily stir up a late 80s pit. Had the band kept up at this level, who knows what possibilities might have ensued. "Who's to Blame" is much in the same style, with further similarities to that Arizona thrash of Sacred Reich, and thanks to the faster pace here, a mix of Atrophy and the more local Nuclear Assault. "Another Pretty Day" slows for another thick and crunchy, ass and breast jiggling juggernaut approach, with Ciarlo's vocal spinning almost into Exodus, Zetro territory with its sinister sneering.

To round this out, the band have included covers of AC/DC's "Dirty Deeds" and Van Halen's "Somebody Get Me a Doctor", both loud and pulverizing and performed in the Jersey Dogs' normal tones. Of course this is contrived and doesn't add as much value to the EP as a few more originals might have, but its always best when a band would make covers 'their own', and this practice is not lost upon the thrashing trio, who slide them on in like a well lubricated pickle to a salivating orifice. The whole 23 minutes of Don't Worry, Get Angry can at worst be accused of its relative mediocrity to the rest of what was going on in thrash metal of the time. The riffs are so basic that they might have taken no more than a few passing minutes to conceive, but for a band out to just step on some toes and have a good time, little more would be required. I can't say that I enjoyed this or ever feel an urge to listen back through it, but I hold no ill memories aside from the cover art, which can only be purged by dropping some Earthlings off at the proverbial pool.