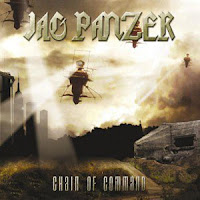 Perhaps it was riding the wave of nostalgia created by the previous year's Decade of the Nail-Spiked Bat compilation, or perhaps the band and the heads at Century Media had long been in agreement that this long lost album was in need of a proper release. In any event, Chain of Command, an album recorded in the 80s and left to languish on the cutting room floor would finally see the light circa 2004 with a remastering job and new cover art, and it was about time. This is clearly a different direction than the band were taking with the classic Ample Destruction, and perhaps this, more than anything would be responsible for the haze of silence over its failure to launch where it belonged, smack dab at the close of a decade in which it might have mattered most.

Harry Conklin was not on board for this release, nor was Joey Tafolla, and their replacements here were vocalist Bob Parduba and guitarist Christian Lasegue. Unlike Daniel Conca, who was chosen for the 'official' second album to see release, Dissident Alliance, Parduba's vocals were very well suited to the band, and in fact he's a worthwhile replacement for the 'Tyrant', though not as frenetic or unhinged. He tends towards a classic, higher range, spot on as he soars to each note. If he's got any flaw at all, it's that he stays within his safety zone for much of the record. But this is not a huge detriment, because Chain of Command is a less aggressive effort than Ample Destruction, and the band were headed towards higher, cleaner melodic ground that eschewed the savagery of the debut without sacrificing much quality in the songwriting.

Speaking of the songs, we've heard several of these before on the band's later output. The stores of this sophomore were plundered for years, the band likely thinking it would never see any official release, so why not snap up the stronger numbers and strengthen them alongside freshly written material? "Shadow Thief", the band's ninja anthem, appeared on The Fourth Judgement, while "Sworn to Silence", "Chain of Command" and "Burning Heart"all appeared on The Age of Mastery, and "She Waits" was re-recorded for Decade of the Nail-Spiked Bat. Still, though the new versions of "Shadow Thief" and "Burning Heart" are probably superior to these, it's still worth hearing the originals with Parduba at the helm, because they were perfectly suited to his vocal tones.

Have no fear, because they're not the only fetching tracks to be found on the original release. "Ride Through the Storm" is solid melodic power metal which arrives at a gallop. "Never Surrender" takes a simple, plodding Slayer-like riff and dowses it in huge, rising vocal patterns that remind me of Lips' upper range on the earlier Anvil records. There are a pair of instrumentals in the progressive metal of the "Dream Theme" and the classical piece with keyboards "Gavotte in D". The balladic bonus track "When the Walls Come Down" erupts into some shrill vocals not unlike a lower ranged Lizzy Borden, complete with classic flurries of piano and acoustic guitar. Lastly, there's a decent cover of "In a Gadda da Vida" by Iron Butterfly, making great use of Parduba's range, and I actually might prefer this to the Slayer version. Ultimately, there might not be a lot here that you haven't heard if you've followed or collected the band's records, but combined with hearing the original vocals, there is just enough to warrant some value.

Personally, my preference runs towards Tyrants and Ample Destruction, but Chain of Command shows what the band might have evolved into had they treaded further down an accessible, melodic metal path instead of reverting to subhuman, mediocre thrash and the other bizarre ideas they'd cultivate for Dissident Alliance. It goes without saying that this record, despite the difference in approach, would have been a vastly superior successor had it come out when intended, but there is no changing history now, and we are forced to appreciate it for what it is. This was a limited run CD, so I'm betting only the diehards and a few random people were able to get their claws on it, but I would commend the band on releasing it as is with a simple remaster, rather than trying to re-record the entirety with Tyrant on the microphone like they did with the material on Decade of the Nail-Spiked Bat.