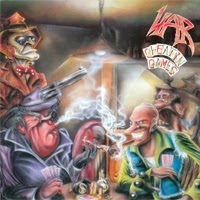 Liar might have seen a change in label venues for their sophomore Cheatin' Games, but the band's sound remained largely untouched. If anything, the band moved into an even more progressive territory, due primarily to the fact that 'Bone' had improved here, or at least learned to integrate his keys better into the band's sound. As such, this record feels like a better balance of their progressive and pop leanings with the existing power/thrash metal core, and a few of the tunes are downright delightful. Otherwise, you've got the same thick thrash guitar tone, spiked with melodies, and a comparable effort from frontman The Duke, though anyone who had listened to Nothing but the Truth and found him a little strange may just warm up to him on the follow-up.

Yeah, he still sounds like Jon Oliva, especially when he pinches his voice down to those odd, wailing mid-ranged melodies, but it never really gets in the way of one's enjoyment for the record. I'll point out "Animals" as one of my favorites here, which opens with a New Age synth enclosure and transforms into this landscape of memorable progressive thrash lite metal that is not quite comparable to many other bands of this period. "L.O.V.E." is similar, with the huge and warming synth tones offset by the uplifting surge of guitars and vocals, erupting before the minute mark into this great charge with backing vocals that cycles back into the next verse. "Standing on the Wrong Side" feels quite a lot like something that might have appeared on the Dream Theater debut When Dream & Day Unite, aside from the obvious difference in vocals, but it's also worth hearing.

"B.4.R.", the third song the band have released with a silly acronym title, is likewise solid, though you'll have to listen through a strange intro first. "Boys Don't Cry" and "Liar" showcase more of a straight metal style, and these too are fairly fetching to the ears. It's not that 'Bone' suddenly disappears, but the keyboards return to a state of complementary existence, whereas in the aforementioned, they serve as more of a foundation. I can't really complain about "Flamin' Youth" aside from its horridly unrealized title, and the organs in "You Will Never" make it sound like a progressive metal slugfest aboard The Nautilus, Nemo and guests jamming as they pass beneath the eaves of deep sea mystery. Quite freaky, but with a real kick to it.

Cheatin' Games is an improvement over Nothing but the Truth in all areas, from the quality of riffs to the integration of the synthesizers and bizarre vocals of The Duke. Sadly, it arrived completely without fanfare, as the handful of people actually cognizant of their under promoted debut had long since vacated the premises, if not the entire genre of metal music. This record should be considered a lost, cult gem of progressive/thrash metal with a traditional flare in the riffing. It's hardly perfection, but everything seems to gel, and the more spins through, the more entertaining it seems to become. Check it out if you dare.