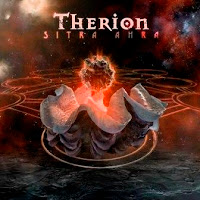 It's a safe assumption that Swedish mainstays have jumped the shark at this point, their best material long behind them, their last stretch of interesting work beginning to gather dust. Sure, Secret of the Runes, Lemuria and Sirius B all had their moments, but the previous album Gothic Kabbalah was average its best, lamentably lame for the remainder of its playtime. The problem really is that the band has become a caricature of what it once created: the fusion of dark, occult themes and symphonic overtures lanced through a fat metallic boil. The male and female choirs have grown stale like old bread, no longer feeling so fresh as they did in the days of a Theli or Vovin, and the band seems to be recanting themselves and not progressing forward. Stale bread might be suitable for starving dogs or the squirrels and crows that clutter your back lawn, but not for someone seeking a deeper musical inspiration.

The reason that Therion's progression is important, is that the band carved out their name upon such an inflated sense for exploration in sound, transforming their death metal roots Of Darkness... and Beyond Sanctorum into the slightly bewildering Gothic death/thrash masterpiece Lepaca Kliffoth and then into a more accessible, bigger budget productions that launched the band out of the underground and into the radar of Nightwish drones, Everquest addicts and closet Renaissance fairgoers the world wide. Truth be told, though, they were still putting out some good music, but that all changed with Gothic Kabbalah, which felt like some phoned in approximation of the band's former strengths, drowned in pomp and cliche. I might not have been the hugest fan of, say, a Deggial or Lemuria, but at least there I still recognized the craft of Christofer Johnsson and his troupe, deep at work. With Gothic Kabbalah, that all came to a roaring halt as the lame fairy metal vocals and such overtook the work.

I feel like Sitra Ahra continues along this same downward, weeping path, though the album as a whole is subtly stronger than its predecessor, successful in at least a few of its tracks. With all of the original lineup now long in the past, only Johnsson remains, surrounding himself with his latest traveling circus. Johan Koleberg of Lion's Share on the drums, Nalle Påhlsson of Treat and recent prog metallers Vindictiv, and guitarist Christian Vidal make up the core, with vocals contributed by Lori Lewis of Aesma Daeva, Snowy Shaw of Notre Dame, Dream Evil, King Diamond and so forth, and primarily Thomas Vikström, who fronted Candlemass on their worst album, along with several progressive metal oriented projects. Obviously, this is a metric shit ton of talent and experience, not selling short Christofer himself, who is the sun at the center of this mutant solar system.

Like previous Therion efforts, both the male and female vocals are contrasted between a pair of styles that provide for most of the album's 'diversity'. The male opera choirs and shrill female opera vocals are both executed well enough, as we've come to expect since the band dropped Theli in the 90s. Whether or not the actual lines are that interesting depends on the particular track, but the non-operatic vocals on the entire album are generally quite weak, from the acidic and goofy males to the standard fairy metal tripe of Lewis. Occasionally, you will hear additional voices in between these two sets of poles, usually acceptable, but the album is constantly cycling through highs and lows of brilliance and awkward, unformed ideas that should have been left in the Johnsson's belly to gestate before being shat out across the album. Below this, the music shifts between traditional metal with sporadic flavours of ethnic and progressive influence, woodwinds and so forth.

It's a giant mess, with a number of songs jumbled together like a jambalaya of suck. "Land of Canaan" in particular is a snoozefest of laughable constituents shoved together to prove the band's ability to drop on a dime through various genres, as much Billy Joel as Diamanda Galas. Hearing such a 10.5 minute monstrosity makes me long for a simpler time, when Johnsson himself performed Tom G. Warrior-like riffs and vocals and the band kicked ass upon a dark, mesmerizing platform. This track is simply folly, and so many unfortunately follow suit, like the forgettable and predictable "Cú Chulainn" or the not so epic progressive metal opener "Introduction/Sitra Ahra" with some pretty terrible female vocals that only occasionally border on welcome (it sounds like something Epica might write, but with a male opera singer guesting). Of course, the band drops in hints of power metal as they have since "The Wild Hunt" on Vovin, appearing here on the brief "Din", "Hellequin" or the often raging "Kings of Edom", which in parts is one of the best songs on this album.

I mentioned earlier that there were several effective compositions here, and that is the truth. I found myself somewhat submerged in "2012", which feels for the most part like a mid 90s Therion piece, despite the acidic, higher pitched vocals which counterbalance the shrill female backdrop and doomed atmosphere. This seems to gel together through its entirety, and I appreciated the Godzilla-like horn sections. "Unguentum Sabbati" makes the best use of Shaw's vocals and a dirty, pumping gait whilst the guitars and horns once more excel in unison, though there are a few puddles of weak sauce dotting its landscape. "The Shells Are Open" has the best, pure choral segments on the album and "Kali Yuga III" feels like Therion took a bite out of Senmuth's acid ethnic doom-prog and supplanted it back within its own fertility center to spawn a beautiful little offspring. "Din" rocks, even with the King Diamond wannabe vocals.

So, with half the album being a busted vein of scrotum tightening Gothic vampirella vaudevillian wretchedness, and the other half proof that Johnsson still has the muster to craft the carnal, occult mystique that made us adore his band in the first place, the ability to immerse oneself in this spectrum of sound will rely on just how apathetic you've been towards the last (shitty) record and all the superior work that came before it. There are bits and pieces for fans of almost any phase in this band's career, with the exception of the first two death metal records, but it very often clashes, with the band lurching from one style of music into the next, the only glue fixing them together being the vocals or production. Nothing feels so fresh or fulfilling as the band's evolution throughout the 90s, and to that extent it does seem to be playing it safe, treading little to no new ground. For about 20-30 minutes of Sitra Ahra, I sat with rapt attention like the rest of the squirrels and birds as they squabbled over the scraps being fed out, squandered against the lamer compositions, but too soon did I feel the urge to go inside and close the door on this forever.