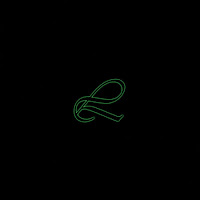 Lustre is an act thriving on sheer atmosphere, minimal complexity; conjuring sparse and haunting environments redolent of a band like Summoning only with the wealth of black metal input removed, namely most of the vocals. Last year's debut Night Spirit was an album I did not necessarily enjoy, but it would be difficult to argue that such a sentiment is the ultimate goal of this project, for the sole member Nachtzeit delights in cold and barren soundscapes for empty natural environments, or vacuous internal spaces from which there is little life remaining to the breathing, sentient host. To that effect, we can safely categorize A Glimpse of Glory as a slim success over its predecessor, for its odor of fallen majesty stains the conscience more so than that dull if inoffensive miasma.

Whereas the debut was comprised of two halves, the sophomore is split into three components, but the sum is roughly the same length (almost 41 minutes). Though not impossible to weed out and distinguish their individual motifs, the general aesthetic is nearly identical, with the swelling ambient keyboards taking center stage over the buzzing patterns of guitars that drone unending across the cold valleys and tundras being crafted out of thin air by Nachzeit's delight in numbing repetition. The drumming is either nonexistent (as in much of "Lunar Light") or reduced to a mere, distant snare cadence, with the occasional crash. Samples are omnipresent through the three compositions, an integral element to the vast spaces evoked by the simplistic patterns of synthesizer: birds, storms, wolf howls, crackling fires, and the like. Vicious black rasping is audible during the lengthy 16 minute opener "This Mighty Sight", but otherwise the music and sampling become the central voices of the piece.

Of the three, I probably enjoyed "Lunar Light" the most, simply for the intensity of the keys as they crash off against frigid slopes of wave and mountains created by the rhythmic swell, with the samples here best suiting the environment. But the other tracks are not unpleasant, and in all I found this a more compelling journey to repeat than Night Spirit. As I've mentioned, there is very little to it, it's nearly as bleak as the cover, so one cannot commence this without some understanding of its stark and bare nature. This is more borne of the ambient genre than black metal, the latter simply a seasoning applied to "This Mighty Sight" and "Lunar Light", void "Amongst the Trees". A Glimpse of Glory does not scream of quality, but for those seeking an absence of dense rhythmic complexity or a consistent audio immersion to place alongside a reading, hiking, gaming or exploring experience, the album does function as intended.