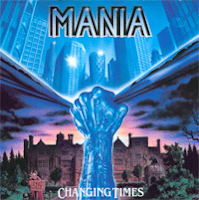 Changing Times was the first and last full-length effort released by the sadly obscure German act Mania, following up the Wizard of the Lost Kingdom EP from early 1988. It could easily be considered both a triumph and a tragedy, because while it improves upon the prior release in both the songwriting and production territories, it leaves the scar of potential upon the listener's ears, never to be stitched (unless you count Klauke's later, similar band Abraxas), only scratched until eternity has come to pass or some grandiose reboot of the material universe. 'Changing Times', indeed, for once the album had seen its limited release through Noise Records, tucked into the shallow end of a roster of overwhelmingly talented bands, three of the members would evacuate Mania, leaving behind just a few to struggle and ultimately fail to produce.

A few of the qualifying hurdles from the debut remain, manifest primarily through Klauke's vocals, which retain their nasal and often nauseating approach. However, when the man is on fire, he truly destroys any of his work on the previous EP, and you really get the sense that he's a knife waiting to be sharpened (which he is, to an extent, in Abraxas). The guitar tone, on the other hand, has readily improved since Wizard of the Lost Kingdom, with a less processed distinction that gives a warmer appeal to the songs. The segues between cleaner guitars and distorted guitars as in "No Way Back" seem to function well, and Didy Mackel remained one of the more interesting bass players in the prototype years of the modern power metal genre, hammering his strings with beautiful ballast, clearly born of progressive leanings.

The "Prelude" here is not so cheesy as "Muffty's Arrival" from the EP, instead offering a warm and welcome sequence of clean guitars joined in brooding synthesizers and a tranquil but cautionary lead before the listener is confronted with the brick house, dark power metal of "The Expulsion". Mackel's contorted bass lines give the track a similar feel to Watchtower, who would release their amazing Control and Resistance this same year (same label), though Mania is not nearly so complex or as adept at dragging you into the world of the lyrical theme. Still, the chorus is great here, and Klauke gives a quality performance throughout. "Turn Towards the Light" joins writhing, speed metal mutes to bigger emotional chords to create an effect not like the material on Scanner's sophomore Terminal Earth, but the vocals are inconsistent.

This is followed by Mania's first power ballad, "No Way Back", which is competent for this style of song, somewhere between Scorpions and Queensryche, with Klauke lending some of his lower range, frankly superior to most of his shrieking heights. "Be Strong" is an average speed metal number with some of those very shrieks. I like the darker feel to the chords and the sharper, piercing vocals, but the track is probably the weakest on the album and never really goes anywhere you'd like it to. "To the End of the World" opens with a Judas Priest bass pump, and you don't hear many power metal tracks about Arctic expeditions, so there is some novelty, while "The Vision" sees Klauke screaming at a Warrell Dane pitch, though he can't seem to sustain it for all that long. Ditto for the venomous "Violent Time", and I'd also point out the corny if well-meaning "We Don't Need War" as a strong point, though "Gambler" is average at best.

There is a far greater level of consistency to Changing Times that makes it the pick of the band's litter, though Mania produced so few offspring that this might not be so much of a compliment. If you can track down the CD version, you will conveniently also have access to the band's Wizard of the Lost Kingdom EP, all in one place. There are a number of small details I really love about this album, like the great cover art, a robotic fist drawing down the veil of history to reveal a glimmering future scape of steel monoliths. It lends the impression that this might be a science fiction speed metal epic like a Hypertrace. That's not exactly the case, sadly, but the lyrics do dabble in several adventurous subjects, despite their largely generic, cliche titles. In a year that produced great Noise titles like Terminal Earth, Fool's Game or Secrets in a Weird World, it is easy to see how many would pass Changing Times by. It's not nearly as catchy, well-written or distinct, and yet I've always valued it as the curious catalyst to a grand career that might have been.