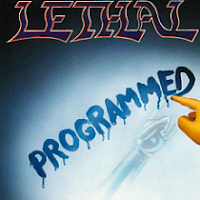 Those of us who worship the fallen legend Queensrÿche are not faced with a lot of options when we seek out material of a similar vein. Comparative late 80s progressive metal acts Fates Warning and Dream Theater veer too far in the progressive territory itself, and most of the other quality traditional US power metal acts of the day seem more like NWOBHM upgrades, some of whom spit thrash into the formula. Sure, we had a Crimson Glory or Lizzy Borden, whose career best offerings Transcendence and Visual Lies might foot and fit the bill, but there is one other, a lesser known band from Kentucky known simply as Lethal, who produced a debut quite close to Rage for Order or Operation: Mindcrime in style through Metal Blade Records in 1990.

Now, before I proceed, let me qualify that this is meant as a compliment. Lethal are in no way a carbon copy of the then-titans of Seattle, but two of the foremost elements in their sound certainly beg the comparison: the thin and sharp pitch and shifting range of front man Tom Mallicoat which often mirrors Geoff Tate, and the melodic splicing of the guitars which recalls that of Michael Wilton and Chris DeGarmo from the 1984-88 period. Programmed shares that same brand of late 80s production, with spacious, simple rhythm guitars that stick to the memory as if by thumbtacks, and wide open, thoughtful persistence. At the time I bought this cassette, I was very heavily in heat with thrash epics like Artillery's By Inheritance and Realm's Suiciety, and this is very near the polar opposite of such works, so I was not truly impressed until it hit me at the right time and right place: the rear passenger seat during an extensive vacation car ride to Virginia, armed with headset, spare batteries and no desire at all to communicate with my family members.

In such an environment, with the sun glaring through the glass panes, eyes tuned only to a broad, blue sky, passing concrete and guard rail and incessant highway signs, the glittering streams of dual guitar and Mallicoat's graceful beckoning was able to work itself about my neurons, and I was soon pretty deeply enamored of the album, or at least the majority of the tracks. Though competently executed with a good number of memorable hooks and heavy, soaring atmosphere, I've actually found Programmed to possess a rather calming effect when I listen through it. Perhaps this is due to its seeming complacency in a period where metal was beginning to grow darker through its more extreme forms (death, black, grind), or at the least complex as thrash completed its maturity cycle. Perhaps it's that some part of me was simply soothed by the fact that a band was still making metal like this.

"Fire in Your Skin" begins with unassuming, ringing clean guitar tones that feel quite similar to the intro of Lizzy Borden's "Me Against the World", with the same ride on the hi hat and build into climactic chords. But at around the minute mark, the axe men explode into these ecstatic guitar melodies that ford the river into the faster pace of the verse, Mallicoat arriving like a siren from the top of a skyscraper, notes arching and falling as if he were Tate's illegitimate country cousin. "Programmed" works a little mid-80 Maiden magic with the churning melodic chords before it breaks into a killer verse, Tom's lines unforgettable, the chorus a killer that would sate any fan of Crimson Glory, Lizzy Borden, or early Fates Warning. The thrills do not stop here, as the "Plan of Peace" teems with excellent melodies and a majestic, rolling pace through the verse and another quality chorus. Experts at plotting an album, they follow this trio with the power ballad "Another Day", which was certainly this band's "Silent Lucidity". Calm, flowing guitars and subtle shifts in mood complement Mallicoat's emotions fluently.

Captured in this sequence, I lust for days of promise passing by
Another place, another time, another ship of fools I am on
Oh, they go nowhere. Should I feel this way?
Have I been this way before? Just another day...

Though the lyrics are simple, they are elegant within their musical shell, and I feel like we've all had moments like this in our lives. Might have been a hit had the band seen some exposure, but alas, there was simply no room left on the shelf of most metal fans these days. "Arrival" returns to the band's superb melodic metal, escalating vocals and beautiful guitar work highlighting the verse. "What They've Done" features a sweet counter-melody in the melodic chugging of its own verse, and another screaming chorus over the perfect selection of chords. "Obscure the Sky" recalls earlier Fates Warning (first three albums) through its vocal notes, though the music is not as twisted or manic as an Awaken the Guardian, and what seems as if it might be a second pure Tate-like power ballad: "Immune" soon shifts into screaming aggression, very close to what we heard on Operation: Mindcrime a few years prior.

After this, the band delivers the REAL second ballad, "Pray for Me", and I feel as if it's the one weak number on the album, not void of distinct melodies, but also not so enticing when compared to any other track on the album, though it is interesting to hear Mallicoat deliver the chorus in a largely middle register. "Killing Machine" closes the album with an acceptable weight, but aside from the bridge melodies there is not a lot here that would charm my ears either, though I liked this more than "Pray for Me" by landslide, and it's good to hear the louder bass presence as it runs below the desperate surges of guitar. Really, though, the mesmerizing effect this album can have in the proper environment does decay after the parting clean tones and vocals of "Immune". The final two tracks do somewhat mar its mirror clear surface.

Regardless of its anticlimactic finish, Programmed is still quite an experience, and one that I'd easily recommend to any fan of 80s power/progressive fare from either side of the Atlantic. The performances are excellent, though the band clearly reins in their capabilities for explosion to ensure that the songs have an almost pop character. This was the finest hour for vocalist Tom Mallicoat, as his work on the following, depressing releases through Massacre Records grew far from compelling. Lethal might have been best off to never step foot in the studio again, leaving just this lonesome, breathtaking legacy in their wake. Alas, the world is far from perfect, the flow of time brings new disappointments and a greater appreciation for when we had it so good: and these Kentucky boys gave it as good as most, having already reached their full potential on a debut album.