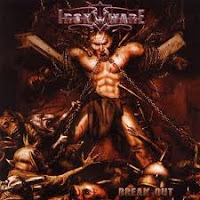 The image that adorns the sole full-length offering of IronWare is one that implies that this is one manly offering, and its presence on the Limb Music roster assures that it will be power or progressive metal, so I was expecting something more aggressive than the usual symphonic, melodic overdrive from that family of bands. In truth, I was hoping for a Grave Digger or Rebellion, but IronWare apply themselves far more to the standard, European style with driving anthems, huge books and acidic vocals, like a hybrid of Helloween and HammerFall. They're still fairly engaging due to the coupling of Pasi Humppi's vocals (also of Swedish melodic power troupe Freternia) with a solid selection of riffs, and Break Out is worth the time if you deeply enjoy Iron Savior, Iron Fire, Lost Horizon, Powerwolf, or the first album from Sonata Arctica.

Humppi functions best when his lines are howled in the incendiary range of an Attila Dorn (Powerwolf), and there are climactic moments that remind me very much of the German band, though IronWare was first by a few years. The chorus vocals are predictable but soothing, and yet he keeps an edge of sharp glass in them to assert some character beyond the typical front man for such an act. The band never quite reach the level of riffing power in which the glands begin dripping saliva in anticipation of each replay, but they commit themselves to enough dynamic, bludgeoning melodic action that you'll keep the head nodding along, even if they never ultimately amount to anything beyond a 2nd or 3rd tier power metal act.

Break Out opens with the "Gateway", a sweeping, brief orchestrated synth intro which conjures up majestic horns and feels very much like something that could introduce a fantasy role playing or historical war game. After this it's business as usual, as the band rocks through 10 originals in about 45 minutes, the first of which, "Holy Man" reeks of Helloween's "I Want Out" with a more punchy edge to the vocals and guitars. Organs glisten off in the atmosphere, but they're pretty flimsy and do little more than accent the escalating of the guitars. Already with "Dark Sun" they've improved themselves, Humpii screaming along with his silken but forceful presence and the backing vocals and ascending guitar lines fairly typical of the style. Few songs here stand out among the batch. Perhaps the cheesy moodiness of "From Deep Inside", the churning speed metal woven through "Sanctuary" and "Man of Hope", or one of most savage pieces on the album, the title track, but all of the material is consistently qualified with acceptable leads and rhythms.

The record sounds quite enormous and timeless in the fashion of so many genre contemporaries, and I doubt it will lose its luster a decade or so post-release. I actually enjoyed this effort more so than Humppi's other band, and was a little bummed that they wouldn't take a shot at a second outing, but alas, seven years have passed since Break Out and there's just no sign of life. As a one shot, this is worth at least a single serving if you're a fan of any of the bands I listed above, or perhaps the heavier Nocturnal Rites records. Most pieces of the power puzzle are in place, but despite this fact the album rarely sticks its neck out among the fledgling horde that adhered to this genre, riding on the backs of the HammerFalls, Primal Fears and Rhapsodies.