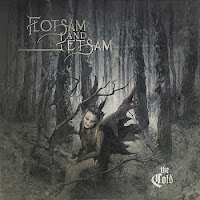 I feel like Flotsam & Jetsam is only too apt a band moniker for these Arizona legends, because their career seems to have drifted from the roiling crests to the unlit depths of many a turbulent sea, with the fans thrown in the chaos, wondering where the waves will carry them next. They clearly peaked early on with Doomsday for the Deceiver and No Place for Disgrace, the latter an excellent and hard ass offering of melodic thrash/power metal that arrived in one of metal's best years, 1988. Since that time, the band have undergone a cleaner, mainstream phase in which they issued tripe of random quality (average to awful) like When the Storm Comes Down, Cuatro, Drift, and High, but ended up inevitably in a more familiar territory. Their albums Unnatural Selection, My God and Dreams of Death seem to have further divided their fans, some hating them and others praising their name. I found that each had a few catchy tracks, but nothing remotely as powerful or compelling as No Place for Disgrace, even when vastly better produced.

Nonetheless, its been nearly 30 years since this band launched their career, and they remain, with their 10th full-length effort The Cold, perhaps the most ambitious the band have released in a long, long time. It also appears to be the sendoff for longtime guitarist Edward Carlson, who split with the band after this recording, leaving only Eric 'A.K.' from the halcyon days when they rode the 80s thrash wave to a deal with Elektra fucking records, alongside Metallica (who copped their original bassist Jason Newsted after Cliff Burton's untimely passing). As for the music, they expand here upon the predecessor Dreams of Death, incorporating elements of power, progressive and even some groove metal into the thrashing foundation that at times manages to rekindle the spirit of the earlier efforts. The album moves sequentially and fluidly forward through these variations, but unfortunately there are painful few which stick, and my enjoyment was limited to just a few tracks here, with others bordering on awkward.

"Black Cloud" is a pretty good example of the dichotomy one might encounter on The Cold. It's basically a groove metal song, with music better suited to Life of Agony or Pantera in the verses, Eric A.K. spitting out a bouncy mixture of political correctness married with life frustration while the guitars jump crash along. It's a little embarrassing to listen through, like a "Sweating Bullets", though this is not the first example of a Flotsam & Jetsam song to do such ("Hard On You" was an amazing if silly track on No Place for Disgrace with a similar vibe). However, the leads are superb in this track, and Erik really picks up the vocal intensity for the chorus, so you find yourself loving and hating it simultaneously. Perhaps this was the point of the thing...perhaps not. Similar moments in "Hypocrite", "Always" and "K.Y.A." offer a similar confusion, as in the latter where Erik yells 'I will kick your ass you crying pissy, I will kick your ass you silly girl'. I realize this is a song of blue collar frustration, but the music is just far too good for the lyrics, and it seems a sodden waste.

But the album also wears another shoe, that of the unflinchingly cool power/thrash metal with progressive touches that appears on "Blackened Eyes Sting", which feels like a fist fight between Nevermore and Vio-Lence with Knutson as the referee. Heightened melodies and jarring, grooving muted guitars provide a fine balance and perhaps, I daresay a 'tenderness' we have only been offered brief glimpses of through the course of their last four albums. "Falling Short" is heavily weighted with groove metal inclination, yet there are a few moments in there with a breathtaking atmospheric power, and the lengthy closer "Secret Life" begins as a brooding, morose treatise on pumping melody and then provides some sporadic, interesting guitar work after the 5:00 mark. In fact, Edward Carlson and Mark Simpson are on fire throughout the whole album, despite the pedestrian grooves that course often flow through their veins, and it might be the most 'technical' Flotsam & Jetsam record to date.

There is absolutely an entity within this record that shows more potential than any other Arizona thrash/speed metal band in the past 20 years (Sacred Reich are out to what seems a permanent lunch, and Atrophy is long gone). Many of the elements the quintet have adhered to their core 80s sound have stuck here, and you'll hear a side to the band that you just weren't sure they could pull off. After this, you will be. The problem is that the record could certainly have lived without some of the shitty lyrics and weaker 90s metal grooves, and they create a debilitating, lopsided effect, like The Cold is attempting to fly with one angel wing while the other has festered into tar, and the oozing substance is slowly devouring the rest of the product. This is superior to a number of their 1992-2001 works, but if Flotsam & Jetsam could just gestate the rays of sun that briefly emit from this well intentioned abomination into a full fledged spike of light, they'd be on the comeback trail of the century.