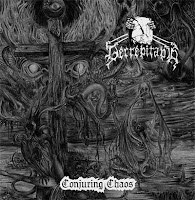 The Lone Star State lobbyists for a return to the primal roots of evil death metal could not be any more different than their brutal, acrobatic counterparts from that region, and the Conjuring Chaos EP continues to indulge the antiquated ear of the morbid, early 90s purist who pines for the days of old Autopsy, Gorguts, Entombed, Incantation and Obituary. This is one of the more successful acts of the prolific drummer/writer Elektrokutioner, and having heard the burgeoning old-school blemishes of Condemned Cathedral and Beyond the Cursed Tombs, both good but not great, one only crosses his festering fingers in anticipation of where and when this band will truly break through the cemetery soil into a realm of utter, ghastly bliss.

If Conjuring Chaos is any indication, that time might be coming soon, because I enjoyed the four originals here considerably more than the full-length material which has to date seen release. There is an enhanced sense of intricacy in the composition, while neglecting to abandon the brute strength of the band's simpler, doomed melodies and stomping corpsepile groove riffs. "Conjuring Chaos" teases with an eerie duet of clean and electric guitars, like some daring scholar or detective as he lights a lantern to explore the nearby mausoleum after a series of mysterious disappearances. The meat of the track is charging, writhing worm-like old school death burdened with Sinworm's colossally gore-soaked grunts, seething in a hybrid of early Swedish and Florida guitar tones. "Birth of Hideous Apparitions" is noteworthy for the slower, crushing climax in which skeletal walls churn and raise from the necrotic abyss, a simple, plaintive lead played like a coronet from a deathly herald's lacking lips.

"Demonfeast" offers us a scathing inferno of hostile fiber, all doomed, downtrodden note patterns played with frivolous abandon, explosions of gnarled, rotting leads betraying the song's almost defiant resistance to running with any particular momentum. "The Loathsome Altar" is one of the better tracks here, decaying atmospheres of oppressive, thick brutality broken by the thrust of the spade into the grave-soil, digging in or digging up the forgotten contents. As a surprise, there is a cover of hardcore legend Minor Threat's "Seeing Red" tucked onto the EP, which seems completely out of place here, as the tones are simply too different from the band's normal material. I feel that a ghastly death metal rendition of this track would have been more appropriate, so it does break up the consistency.

This is a small run release limited to about 1500 copies of cassette and CD combined, through a label other than Razorback, so you'll want to snag it up quickly. The quality of the four original tracks is easily on par with anything the band have yet released, but I still feel like the Texas two are capable of far more. The samples, for instance, are adequate, but do not flow passionately into the material. The riffs are improving but could still be a little more vile, and some of the grooves more ballistic. I feel like Decrepitaph are on a slow but steady and sure slope towards inevitable greatness, but we've yet to see that final acceleration to place them at the standard of their lords and masters. Still, this should enthrall those seeking pestilent resonance from the genre's catacombs.