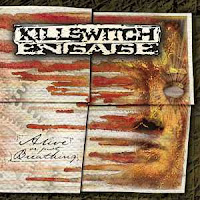 How does one take an already awful idea and make it worse? I may not have the answer. Killswitch Engage, however, have crafted an enormously successful career out of doing exactly this, and their sophomore effort Alive or Just Breathing reeks of everything wrong with the first effort stretched into a near caricature of the most commercially realized cash cow since the Teletubbies. Somewhere between the dawn of the century and this record's release, Jesse Leach realized that he could sing with all the melodic power of the burgeoning Californian pop-punk scene, and he will remind us repeatedly here just how wonderful it will sound when mixed in with a miserable roll of mosh core, tranquil radio friendly segues and an almost intolerable level of In Flames worship.

Have you ever been shopping at the local superstore mall, browsing through American Eagle, Abercrombie & Fitch or Bath & Body Works, dreaming of the days your favorite Gothenburg melodeath band would be acceptable enough to play on the carefully plotted and positioned satellite radio stations used for capitalist ambiance? Well, Alive or Just Breathing might just have your ticket, because it is one of the safest, most stagnant records I've ever heard. The few worthwhile guitar licks on the album are interspersed with an enormous level of emotional pop shit that would even cause everyone's favorite Swedes to cringe in dismay. I don't mind a bit of In Flames, mind you. I love their first few albums, and in fact I've even enjoyed a few of their later albums where the band returned to memorable, if modernized songwriting that dragged up the uplifting force that made the band famous in the first place.

Alive or Just Breathing is like the close-cut, metrosexual cousin to early 21st century In Flames. You could discuss this around the kitchen table with your liberal girlfriend and her family living in some gated community, and when you feel angry and run out of Paul Walker/Vin Diesel car chase movies to sate that raging beast within you, you could totally choke a few bitches to the powerful positivity and pop sentimentality of "Self Revolution" or the vicious overtones of "Just Barely Breathing". Remember when that unnamed singularity hit Earth around the mid 90s that made the underground metal majority turn their anger on Texas rodeo metal howlers Pantera? This record is so full of cheaply plotted chugging breakdowns and worthless pretty girl pandering that even the most jaded Anselmo antagonist will pine for the days when Far Beyond Driven was the greatest evil in the world to rally against.

There are exceptions to the rules of the road here, like the first :45 of "To the Sons of Man", a fast-paced melodic death/thrash number with a few exciting riffs, but even here the band have to soil themselves and lapse into a breakdown coma, followed by clean vocal backups and less interesting riffs. Still, this is the best song on the entire album, and its limited to just 2 minutes of total playtime. "Temple from the Within" and "Vide Infra" are included from the debut with sparkling new production values, but since they were not good to begin with, they haven't exactly improved in the few intervening years. "Life to Lifeless" shifts between soulful clean vocals ala Puddle of Mudd to a Panterrible swagger of its own, with one half-decent thrash riff in the center that makes the remainder so goddamn frustrating, until that riff itself morphs into a fuckwit breakdown as well. Otherwise, this album falls apart almost immediately with "Numbered Days", a roiling pit fest of emotional peaks and valleys with Earth Crisis vocals, emo bridge and enough lame squeals to populate a Guitar World convention.

I've read numerous accounts of Alive or Just Breathing that hold it in extremely high regard, as if it were the Noah's Ark or saving grace of the melodic death/metalcore merger as it has been run through numerous corporate hands and approved for Jagermeister or Vans sponsored tours across the bleak suburban landscape. This is like the best album ever, like, they totally played "Fixation on the Darkness" at my junior prom. Are you fucking kidding me? This album is one of the most loathsome approximations of its confused identity genre; a stagnant waste of time and space that could only appeal to the biggest suckers among us. Shame on you for buying this, blowbacks and throwbacks. I sentence you immediately to confine yourselves to a stereo and listen through all of Kelly Clarkson's discography, which is more brutal by a landslide.