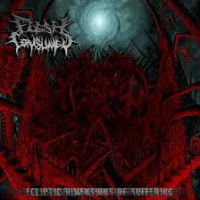 It almost seems unfair that California is producing so many of these sorts of technical, brutal death metal bands in the 21st century, tilting the nation into a lopsided plain of brutality. Granted, the style is not for everyone, and dissenters who disdain any material which sounds as if it were created post-1993 are unlikely to have a change of heart here, but I rather enjoy the work of Severed Savior, The Faceless, Decrepit Birth, Odious Mortem, Inherit Disease and so forth. Flesh Consumed fits right into this pattern, another talented bunch of maniacs whose visceral apple doesn't fall far from the tree of entrails, conjuring a brand of polished brutality that delights in lobotomizing the skull with whirls of technical shredding in between drawn out passages of slamming rhythms and terrifyingly brutal drum work.

If you were to trace the band's roots back, further, of course you'd arrive at the usual suspects of Deicide, Suffocation, Gorguts, Cryptopsy, Cannibal Corpse and Morbid Angel, all via Deeds of Flesh, a band that also seems to have influenced many of these fresher acts. The members all have experience with other small time underground acts like Vaginal Discharge, Lacerated and Eviscerated, with drummer Ron Casey also serving double duty in the more technically intense (but less interesting) Brain Drill. Casey is as much a beast here as that other project, his feet and wrists constantly hammering each thrilling blast, honing each slower, stomp rhythm with added complexity. Vocalist Corey Athos has the stock bark down, and the guitarists are both well versed in the genre to offer constantly shifting panoramas of extremity that do not dull the attention when listening.

The band is at their best when busiest, with winding monstrosities like "Immortality Through Infinite Consciousness" and "Caverns of the Disembodied", which keep the mind attached as they explore a wide variety of intricate riffs and cavernous, claustrophobic horrors. There is enough of a groove element to satisfy the slam-death enthusiast, but the band are never quite so simple, so if you're not enamored of intense barrages of guitar work as in modern Cannibal Corpse or Decrepit Birth, you might seek your grisly entertainment elsewhere. I liked the strange interludes performed, like the guttural spoken word of "Forever Chained", warped guitars of "Valleys of Rust" and the eerie, scattershot ambiance of "Doomed", and it might be interesting to hear these elements incorporated more directly into the songs, but Flesh Consumed fire on most cylinders here, and even the crudest ass stompings like "Interspecific Coalesce" and "Chamber of Torture" deliver the goods. There are also a few guest spots from Luc Lemay (Gorguts) and Erik Lindmark (Deeds of Flesh) on vocals, and Craig Peters of the similar Arkaik contributes a solo.

Ecliptic Dimensions of Suffering is more of the same, at least if you've been following this style now for the nearly two decades it has been made manifest. I mean, ask me as a teen if I ever would have thought fare this extreme would become 'garden variety', and I would have looked at you with astonishment. But at the least it's well written and entertaining, if you can shut out the fact that the music is largely interchangeable with any number of similar acts. Modern death metal has become a contest of riffing patterns, technical marvel and otherworldly atmosphere and lyrics, all of which Flesh Consumed do offer here, if not as far out on the spectrum as several of their peers. This is easily an album I'd turn to when seeking out this brand of Californian brutality, with intricate riffing aplomb, so it's worth a listen and probably a purchase if you're down with the band's peers.