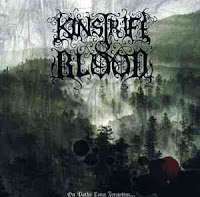 It takes nothing beyond a glance at this album's title to develop a connection to the Austrian band Summoning, since they had the epic song "Long Lost to Where No Pathway Goes" on their 1999 album Stronghold. In truth, Kinstrife & Blood feels like little more than an Australian tribute to that band, and not a necessary one, because the sound is just too similar that I can't argue with anyone calling it a cheap knockoff. About the only reason one might listen to this album is if he or she feels such an affection for the works of Silenius and Protector that their (of late scarce) output is simply not enough to sate the longing for epic vistas of glory and sadness wrought with keyboards, tiny streams of melancholic black metal guitars, rasped vocals and cheap drum programming.

Even in such a case, there are better alternatives, like the Croatian band Mischosen who take the Summoning influence and channel it into something more innovative. This is unfortunate, as there are positive qualities to Kinstrife & Blood, if only skin deep. The logo and cover art here are wonderful, promising a natural mysticism and acknowledgment of the life/death cycle. Balam is normally a talented individual, vocalist for the amazing Australian black super-group Nazxul, also involved with Pestilential Shadows and Rift. To his credit, he does a fairly apt impersonation of the Austrians, channeling the same morose through steady repetition and slowly shifting rhythmic patterns, but it never quite summits that hurdle of cheapness that soils the spirit when you know the band you are listening to is simply biting off a forebear, a little too much.

"On Paths Long Forgotten..." itself is but a minute length teaser/march that heralds one of the four primary compositions, ranging from 7-10 minutes in length. "The Bronze Army" uses wet and synthesized horns and slowly arching, longing guitar lines to create an acceptable epic for battle, but the thrills run out after only a few minutes, since not a single shift in the song comes close to the opening rhythm, and you could randomly play any track from Stronghold or Let Mortal Heroes Sing Your Fame and become more immersed. In title alone, "Grey Lands" seems to channel a Summoning Influence ("Grey Heavens", "The Passing of the Grey Company"), and once again we feel that Kinstrife & Blood simply feels hollow. The situational and compositional awareness that is carefully built with each Summoning track is void here into the bare minimum of effort, a minimalist approach that shares the same spirit, but not the same ultimate effect.

"As Hawk Flies Over Embattled Waters" is nearly 10 minutes long, and of all the tracks On Paths Long Forgotten... it is the most engrossing, simply due to the repetition working itself upon the psyche, and "The Walking Dead Amongst the Fog" does have a suitable slow chug to its guitars which mirrors the subject matter, but these bits feel too late to really save the album from its lapse 'been there before' vibes, and there is simply nothing here to recommend over anything the Austrians have ever released. Considering that the flawless and iconic Oath Bound was released this very same year, there is no purpose in choosing the student over the master, and Kinstrife & Blood very soon sinks to obscurity. Perhaps Balam will one day revisit this work and create a tangent to its influence rather than a cloning process, but he's busy with far better projects than this, so I will not hold my breath.