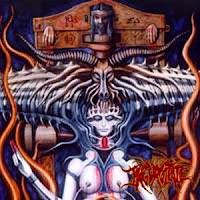 Texas has rapidly developed into the next 'Sweden', 'Poland' or 'Florida' in terms of its death metal scene, but fear thee not, this is not the type of community bound to produce world touring super star songwriters concerned with image and melody. No, the scene in Texas is downright fucking hostile, and Ingurgitate are just another band involving members of...well, other local death metal bands. Specifically, current and former conscripts of Infernal Dominion, Devourment, Viral Load, and Braced for Nails, a few of which are pretty damn fun in their own right. Judging by the intriguing occultism of the cover imagery, and welcome lack of gore and torture porn that adorn even some of the members' external works, I was not sure quite what to expect of the sound.

Perhaps I expected some Deicide or Morbid Angel worship, but while these are present to some degree as they are with all such acts, Ingurgitate are more in line with the ripping Midwest brutality of a Lividity, or their fellow Texan bands. While not as stomping or slamming as, say a Devourment, they've otherwise got that same devotion to sheer guttural force and highly percussive riffing, which makes sense, since this debut is largely the work of one Chris Hutto (who was also in that band). The drum rhythms are intense, riotous walls of double bass engorged upon the deeply chugged vortex of mutes, sometimes winding off into streams of clinical grief "("Disavow Christian Ignorance" or "Archaic Persecution of Allegiance to Jesus Christ"), but also throwing the listener for a loop or two, like the pummeling open notes ground up late in "Enthralled by Christian Reverence" or the melodic spawn point located deep within the crypts of "Scathing Tractarianism Immortalizing the Beheading Christ".

The summary execution of both Holy Spirit and Samaritan found in this band's titles and lyrics is probably not going to appeal to the average churchgoer, but for anyone who desires a mindless slug fest behind the local mortuary, come and gone in about 25 minutes of explosive rectal sacrilege, Blackest Origins might just have enough meat and muscle to sate that killer within for just a few more days. This is not a band long on riffs, but the primal violence created through the guitars and deep logistics of the hammering throat-work should ensure a satisfactory level of damage and discourse for any who would keep his or her expectations realistic for something arriving in this particular crop of bands. This is hardly a death metal classic, but it functions with its perturbed imagery as it grinds the image of falsified human iconography into fertilizer.