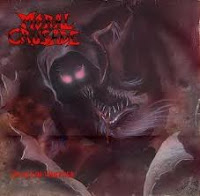 Moral Crusade were really just another of countless hundreds of thrash bands, no doubt inspired by the success of Bay Area greats like Metallica, Exodus, Testament and Slayer to form their own act and give it a go. But they do have one particular distinction: they were one of the tragic few groups of this style to hail from Ireland. Considering the angry stereotypes we usually associate with the place, it's almost surprising, but then, there has always been but a small knit circle of metal acts in any substrata from that nook of the world, so why should the late 80s thrash wave have been any different?

The band produced a demo in the year of their creation, 1998's Immoral Condition, and later spat out this sole album, which fell far below the radar as there was only so much coin to pass around to the legions of better known bands struggling to try and break that 'Big 4' or 'Big 3', dependent on your individual preference. Unfortunately, even if they had benefited from some mass exposure, I fear Moral Crusade would not have made much of a difference, as the music they wrote here was all too middling and typical of its day. Crisp, crunchy and angry thrash that reminds me of so many 'lesser tier' bands like Defiance, Wargasm or honestly, about a thousand bands that never made it out of the rehearsal or demo stage here in the states. The album contains a few of the demo tracks in "Hate War" and "When the World Dies", and the remainder was written for this release, so it's safe to assume that it represents the bulk of their brief career.

I say the record reminds me more of US thrash due to the clumsy but charismatic barking of the vocalist, 'Pincher', who has a pretty typical style found often in street-thrash or crossover bands California and beyond, and the riffing seems to focus on that mid-paced schematic we have come to know from a Wargasm or Anvil Bitch. In fact, from what I've read, the band actually evolved out of a crossover/hardcore band known as Chromatic Death. There are, however, some wild breaks of speed during certain segments or leads which remind me of Exodus or the German scene, and I for one wish there had been more of this material, like the solo bridge in "When the World Dies" or the cruel, twisting anger of "The End".

Otherwise, so many of the tracks just pump along like a forgettable train of nightly barroom brawls. "Streetwise" has a seasoning of Destruction in its violent escapade, and "Premeditated Murder" threw a few undeniably raw riffs right in my face, but I found even the moments of nostalgic fervor I feel for this genre to fade rather quickly when I listened through this again. It doesn't help that the production is meek, with the guitars so loud and chunky that the bass becomes close to a non-issue, the drums trebly and crashing enough to at least provide a seat that the guitars and vocals can sit their fat asses into. The lyrics delve into the typical thrash subjects of its day, from hatred and domestic violence to the broader strokes of Armageddon.

In all, there's nothing necessarily bad or poorly contrived about An Act of Violence. It offered a bit of headbanging for your bucks, but nothing that would last in the tape deck or record player for more than a few spins before the attention sought out the more vivid musical statement made by a myriad of others. The same record could have come out of any 'burb in the States during the 1988-1992 period, so there's not much of a cultural distinction in the rhythms, and thus it once again returns to the dark side of memory, the dust of long settled aspirations, the twisted visage of its cover mascot (Spider-Man's arch nemesis Venom with a beard, anyone?) leering from a forgotten place.

(You can download the tracks from the album through a link on their site).
Posted by autothrall at 9:52 AM