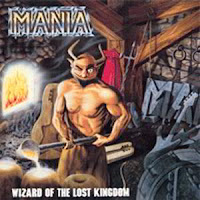 Having been an extremely avid collector of the Noise Records roster in the 80s, I often found myself salivating over every release the label would muster, and thus every new band name to appear was a thrill to seek out. Mania was not one of their most successful outfits, but nonetheless when their name appeared on the Doomsday News II compilation in '89 alongside some of my favorite bands like Rage, Watchtower, Coroner, Mordred, Vendetta, and so forth, I was compelled to immediately track down their records, beginning with their EP from the prior year, Wizard of the Lost Kingdom (this had the song "Break Out" from the compilation).

While I wasn't as bowled over by this as most Noise releases of the period, I found a tasteful and competent effort of melodic speed/power metal with some similarities to label mates Scanner, but with an added level of intricacy to the guitars and less of that raw, shrieking power that dominated that band's debut Hypertrace. Another obvious comparison would be Helloween, also from the Noise roster, but there are some differences in the vocals and bombast of the riffing. Speaking of the vocals, they may prove the one barrier to entry for new fans exposed for the first time. Chris Klauke has a high, crystal range which is slightly marred by his accent and an oft overblown tendency to remain in the same, higher register when a more diverse span of octaves might have better suited a song. Once in awhile he'll spike up into a higher pitched scream, but for the most part he's wandering just below the shrieking of say, Peavy of Rage.

Wizard of he Lost Kingdom features five originals, book-ended by an intro an outro known as "Muffty's Arrival" and "Muffty's Departure". "Arrival" is driven by synth sort of like the intro to Helloween's "Halloween", bridging into a sequence of chords and pumping bass line that herald the fairly fast, melodic rush of the title track. While perhaps not so endearing as the work of the band's closest peers (all mentioned in the previous paragraph), the track soundly engages the listener from the verse to the chorus, in which Klauke climaxes with a shriek. The lead sequence cycles a little too briefly through a classical influence, and I don't love the vocal lines through the entirety of the track, but otherwise it's decent. "Night of the Blade", on the other hand, is superior, a slower paced, slamming power metal warning in which Klauke's soaring, biting vocals seem better suited.

After this, the EP continues to pick up, with the delightful power anthem "Gods of Fire", spears of ascending and descending neo-classical guitar lines drawing out a glorious mysticism, while "Under the Sign of the Cross" presents a volley of mid-paced, thrashing fare with some interesting time breaks and a bass that crashes right up against the processed guitar tones. "Break Out" follows, and it's arguably the best track here, with some fluid bass and an edgy, progressive tone to the opening chords before the almost creepy verse patterns erupt. Klauke's vocals are a little loose here, and might have used an additional layer of polish, but despite the strange nasality I find the chorus and riffs here most effective of anything on the release, in particular the bridge and leads.

Mania were not quite up to the level of their close neighbors here, but as a fresh burst of proto-modern power metal, it's a worthwhile curiosity to anyone not put off by heavily accented vocalists or the production of the day. The guitars do feel rather too processed through the album, and might have benefited from more of a raw power that Rage or Scanner was using, but at the same time they give the EP a pretty distinct feeling, and jive well with both Klauke and bass layer Didy Mackel. Wizard of the Lost Kingdom has its small, characteristic flaws, but since it was later released as ad addition to the following, better Changing Times album, then it is worth checking out if you're fascinated by melodic German speed metal with imagination, like Scanner or Reactor.