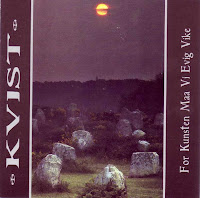 That this cult Norse act are named 'twig' could not be more ironic, because they were one of the more forceful of the mid 90s wave black metal bands: a storm that could snap off not only the twigs and limbs but the trunks of the mightiest trees. Thick and impressive drum batteries and surges of well written guitar riffs are their chief characteristic, but Kvist deserve praise for much more than this, as they were one of the very few bands of this scene outside of Emperor who could pull this off with healthy helpings of keyboards. The ever cautious balance of haunting organ orchestration and grim savagery creates one of the most superb atmospheres among all of the Norwegian black metal scene, and though For Kunsten Maa Vi Evig Vike stands eternal as one of the best releases from that era, it's striking enough that I will forever pine for what might have been had their path been longer. There are but six compositions clocking in below 38 minutes of playtime, most of which are culled from the band's 1994 demos, but even this is enough to create a brilliant twilight space between menace and grace that will conjure only rapt attention from the listener.

The album has a unique level of accessibility that might even sate the tastes of the mid-90s Dimmu Borgir bandwagon while never alienating its more shadowy, underground admirers. For Kunsten Maa Vi Evig Vike has a clear enough mix to flaunt the various instruments, without abandoning the necrotic grime that so many cult classics are lauded for. The bass is tremendous, instrumental in the album's success, whereas so many peers used it as an afterthought to the cascades of guitar and synthesizer. Endre Bjotveit's drumming is superb, with all the blasting and double elements that drew the masses into the embrace of extreme metal, and the guitars and synthesizers twist and bleed together like the desperate symphony of the asylum bound, conjuring landscapes of tombstone fields, dark forests of dripping dew, mist and cobwebs, and spectral castles. "Ars Manifesti" teases with a brief, ascending thrash pattern and loud, plugging bass before a sheen of sanguine chords heralds the black metal genre's arrival, and Kvist storms through a number of unforgettable chord sequences surrounding a core of driven, raw impulse that would sate the Mayhem or Darkthrone fan. Once it strikes about 2:00, the keyboards revel in such symphonic grace that you can feel a ghost version of yourself begin to step out of your corpse and teeter on the brink of an incorporeal world. "Forbannet Være Jorden Jeg Går På" volleys forth with as much force as a battering ram at the gates to some Christian barricade, but the blasting soon cedes to a broth of glorious melodies and marching pace, culminating in the majestic, bass fronted rise at 2:30.

"Stupet" marries a clever ascending and descending guitar pattern intro riff before its own path into the sadness and longing of no sustenance, crashing back into its opening chord sequence and then a pale majesty that will bring you to your knees to kiss the weeping dew of a cold autumn morning. This is followed by the shortest piece of the album, "Svartedal" which falls beneath a 4 minute length, a surging mid-paced rager perfect for the storming champions of Northern Europe past as their long ships ford the rivers and streams of history. Conversely, "Min Lekam Er Meg Blott En Byrde" is almost 10 minutes, built to withered fruition through a cautious grandeur of chord calamities and streaming warfare that at 4:00 transforms into one of the most ghostly environs of the entire experience. Clean strings pluck beneath the eaves of darkness conjured by the keyboards, until the frenzy is rejoined for the final third of the song, and rekindled in the finale "Vettenetter". This last piece is predominantly faster and predictable, and probably my least favorite of the album, but it too breaks for some rousing sadness, a majestic culmination of the constituent strengths that led you to its black curtains.

Kvist were truly a gem among the Norse wave of the 90s, though sadly under-appreciated by the masses that were chewing up Emperor, Mayhem and Dimmu Borgir, rarely with enough space in their attention span or currency in their wallets for the occasional Darkthrone or Immortal record. For Kunsten Maa Vi Evig Vike falls shy of perfection only by the one or two moments that flirt with redundancy, but it's so well crafted that these are easily forgiven. Well past a decade into its lifespan, the album has the elusive quality of timeless listening, as if archaeologists could dig it out of the earth centuries hence and wonder at this foreboding, obscure musical epoch where men wore spikes, leather and paint to dilute their individual personas into the sweeping cataclysm of their performance. But better not to wait for such a scene, so far away, when you can own and lavish your own praises upon it today.