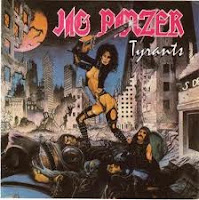 The annals of metal history are full of stories of bands that would have been, or should have been among the elite and the few, the celebrated and the rich. Some of these acts dropped off the face of the planet, some saw that metal had new life in later years and decided to give it another go, others went through a roller coaster of bad and good decisions, found a second wind and went on to a fairly successful career despite all odds. Jag Panzer of Colorado falls firmly into that last category, because while the band started off with only the sky as the limit, their first attempt to regroup was an astounding failure, and then, reuniting with their original vocalist in the later 90s, they managed to initiate a streak of new output with the help of high visibility metal label Century Media.

The Tyrants EP, named for the band's original moniker (there were already too many Tyrant bands out there) and adopted by Harry Conlkin as a stage handle, was a pretty potent, if endearingly silly piece which arrived in a year when metal was truly starting to kick into gear with the emergence of thrash. As if in unconscious rebellion, Jag Panzer were one of the few bands to arm their traditional metal missiles with some true balls, upping the ante for the droves of NWOBHM influenced acts without ever abandoning their influences. The prime distinction of this band has always been Conklin, for the large range of expression he places in his performance, from angst-ridden Bruce Dickinson-like heights (more prevalent on Ample Destruction) to vicious and acidic sneers and screams, shrill shrieking and a manly 'whoah whoah' that is often joined by the backing shouts of the band. However, let's not take away from Mark Briody's relentless riffing, aggressive alterations on Judas Priest, Black Sabbath and other metal staples.

Tyrants feels fresh, innocent, and surprisingly, it endures to this day as an example of classic USPM done justice, even if its not the band's best work. Samples of warfare herald "Battle Zones", a savage and dirty brawler above which Harry's vocals bounce to and fro in nearly schizoid patterns that are both hilarious and quite unforgettable. "Death Row" opens at a slow triplet trot, picking up with drums as Conklin creates a manic circus asylum of half narration, half howling, with an effect not unlike earlier Overkill on Feel the Fire or Taking Over, which came a few years later. "Metal Melts the Ice" is based on a cruel riffing pattern which just begs the listener to begin a fist fight, a primal simplicity joined with some delicious if fragile fills before the uncouth lead erupts. The fourth track on the original release of the EP, "Iron Shadows" is about the most ludicrous thing the band would offer in their early years, with a very rustic, medieval tone to the guitars which pound along like early Maiden, fantasy lyrics loaded with character and an almost absurd narrative quality.

The track later added is "Tower of Darkness", with a slightly more grimy production and horrendously silly lyrics about some witch or vampire chick waiting to seduce the Tyrant. Its all in good fun, but not up to the standards that dominate the core tracks of the release, and thus might be better passed off as 'invisible' when one decides to reminiscence on the cutting steel of the original release. Basic heavy metal, not offensive but too corny even for Jag Panzer. This is really the only complaint though, because Tyrants is ultimately a fond introduction to a band that would one year later release one of the most underrated and timeless efforts in all classic US metal, improving in every possible category over what you'll hear on this.