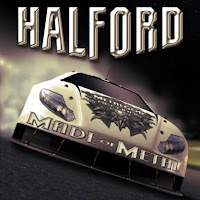 After the past two mediocre Judas Priest albums Nostradamus and Angel of Retribution, and the only marginally entertaining Christmas album Rob released last year, I have to admit that I was not quite excited for his next true, original-loaded solo venture. Then, when the single for "The Mower" dropped, I was even further perplexed, for it featured Rob's Painkiller era screaming over some extremely weak, chugging riffs that did absolutely nothing of note. Fast forward a few months, and you can see the terrible cover art to his latest album, Made of Metal. Yes, by this point, expectations were not running high at all! But, you see, Halford is just one of those folks one should NEVER count out, because lo and behold, this new record is the strongest he's done since his first solo under the Halford moniker, Resurrection, trumping Crucible in the overall songwriting.

Yes, Made of Metal is far better than it has any right to be, especially when you consider this man's age. But his vocals are still on top, conjuring up a performance here that should prove a thrill to fans of his 80s work like Turbo, Defenders of the Faith and all leading up to the amazing Painkiller. This is also a fairly diverse album, with Rob trying his hand at new subjects and slight tweaks to the formula he's been a part of for nigh on 30 years. You've got your more modern power metal with NWOBHM roots, namely "Fire and Ice" with its descending, gorgeous slopes of melody, and then a number of pure old school Priest-like pieces via "Speed of Sound", "Hell Razor", "We Own the Night" and two of the strongest songs the man has written in forever, "Like There's No Tomorrow" and the "Breaking the Law"-like "Matador", the latter showing him in extremely strong form vocally, arguably the equal of anything in his career, with hard as hell drumming courtesy of veteran Bobby Jarzombek.

The whole band turns in an amazing performance here, with Metal Mike Chlasciak and Roy Z ousting their prior lead work on Resurrection and Crucible, and Mike Davis throwing it all down with his steady, powerful plucking. The solos are all well written, adding interesting aspects to the songs that go above and beyond a mere formulaic acknowledgment of the rhythms beneath. This is especially true of "Matador" or the arena metal anthem "Thunder and Lightning". There are very few songs on this album I would kick out of bed for crackers. Strike that, only one. And if you were paying attention, you'll know exactly which I mean. Thankfully, "The Mower" is tacked on to the end of the album, almost as if Halford & company saw the reactions from the early release and realized it was not the single they might have been expecting. But alas, it still remains, a stain of poison in an otherwise pure, delicious apple. A few of the other tracks suffer lyrically, like the ballad "Twenty-Five Years", the metal boxing anthem "Undisputed" and the goofy but lovable robot alien sci-fi schlock of "Made of Metal" itself, which...sort of addresses the cover image?!

The Made of Metal mix is quite superb, and perhaps this is one of the reason's Rob sounds so good. He literally soars across the metalscape, but not at the expensive of the instruments. The rhythm guitars are given excellent crunch, the melodies ringing off beautifully into the night, and the drums are loud, clear, and forceful. Like the latest from Accept, or Saxon's excellent streak through the late 90s to the present, it's an album that enforces the cliche of 'old dogs with new tricks'. Surely, Halford is paying tribute to his own career, but this is once again about getting with the times, without losing what made you so important in the first place. My hat is off to this living metal deity, now if only he could convince Priest to write something worthwhile...it has been far too long.