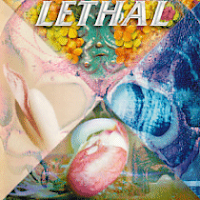 After the depressing 1995 EP Your Favorite God, which was a sort of official presentation of some of the material the band had demo'd since their excellent album, I was not holding out a lot of hope for the ensuing album. The band had incorporated cheap aggression through the form of weak grooves, and lost a great deal of the delicate balance that made Programmed such a treat to listen through. I anticipated only a direct continuation of that material, and to an extent this is what Poison Seed delivers. However, the specter of songwriting potential from the debut does seem to re-surface here, shining through the unusual eyesore gracing the cover, and though this doesn't even come close to the shadow of its predecessor in terms of overall quality, I feel like the sophomore was at least headed back in the right direction. It just had so much further to go...

Clearly the band kept their Queensrÿche influence, primarily through the vocals, but also that Seattle band were experimenting around this time with bigger grooves and more 'modern' elements to the music, and failing at it far harder than Lethal. You can also hear a little of the Ray Alder from Parallels or Inside Out, and perhaps even a little Alice in Chains (part of "Bitter Taste" reminded me of Layne Staley). But the biggest distinction here would have to be the heavier, chugging guitars, given enough bombast not to run steady with the lame nu-metal pundits of the mid to late 90s, but at least doing something to bridge the distance with the OzzFest crowd and Pantera-whores. The line-up here was consistent with the prior year's EP, so perhaps by 1996 the band had just refined their direction enough that they managed to avoid a complete suck fest.

"Down" feels like a heavier, darker approach to some of the Programmed material, and the crunching weight of the guitar tone actually reminds me a lot of Ray Alder's side project Engine, especially the way Mallicoat carves out some of his ascending lines late in the verses. This is not a good song, necessarily, but at the least it is superior to anything from that previous release, and I felt a breach in the tension and despair I held. "Bitter Taste" crafts a simple, bludgeoning flow through the twanging melodic guitars of the intro and the pumping bass, but after that it can feel a little shrill and silly, especially the vocals as they shift from the accessible mystery of the verse to a more funky, Axel Rose meets Layne Stayley vibe. "Born" is a bright and bluesy, folk ballad piece with some soothing vocals and crisp guitars, but it can't match "Another Day", and the following track "Walking Wounded" delivers only generic, chugging guitars which must not have taken more than a few seconds to write.

"Poison Seed" itself is yet another diversion similar to "Born", with clean guitars and a mix of Geoff Tate-like mid range vocals with distorted, almost electro bass tones. It's actually one of the better songs on the album (I know that is not saying much), picking up in intensity though it never transforms into metal anywhere. I could see someone who dug Alice in Chains or Queensryche ballads, some strange Seattle connection, nodding his/her/its head to this, and the band incorporates a string section which scintillates alongside the pluck of guitars and bombast of the bass. "Watch Me Feed" is a doomy piece which once again sounds like...you guessed it, the fabled grunge band, albeit at a metallic pace. The same goes for "Meaning", though the vocals are quite good with this one. If only the music had followed their lead.

"Now" creates yet another of the band's dreamy, clean guitar sequences with more strings, decent if forgettable, and "Your Favorite God" starts with bass and then the lamentations of some strong, wailing guitar melodies and even more wailing vocals. The latter is another of the album's strongest, despite a few forgettable rhythm guitar lines and a continuing influence from Layne Staley, there is something about the screaming vocals that succeeds. "Odd Shaped Pearl" is an instrumental which continues the use of string section, here aligned with acoustic guitars in a clever little classical outro. This doesn't only close out Poisoned Seed, but the band's career, at least until they see fit to release something new (the band is still active in some form).

While this sophomore is a mess of ideas that do not always fit so well together, it falls into the category of 'could have been worse' rather tightly. A number of the songs here stand out to mind far more than anything on Your Favorite God, but that's not high praise, as the EP was largely abysmal. When scratching a Lethal itch, there remains no alternative to Programmed in terms of desirability or quality. However, if you are masochistic and want to hear what the Kentucky crew were doing to adapt and assimilate themselves into the 90s, the near 50 minutes of Poison Seed will leave you only in a state of bewilderment. Never truly awful, but often hovering close to that state, it stands as yet another timeless testimonial to why a band's evolution need be very carefully monitored, more efficiently than Lethal were capable of.