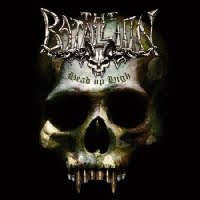 The Batallion is yet another of those projects born of a cross section of Scandinavian metal musicians who collectively have a wealth of experience in the field. Tormod Haraldson has played with Helheim, Taake, Dead to This World and Amok; Ole Walaunet with Grimfirst; Kai K Lie with Borknagar; and Tore Bratseth with Old Funeral. Of course, here in The Batallion, they've adopted pseudonyms that better suit the 'fun' and mock danger of the nasty, black thrashing persona, so here you know them as Stud Bronson, Lust Kilman, Colt Kane and Morden, all strangely fitting for this band and in particular this record, which brilliantly compiles a sound from classic black and thrash metal and executes it with an almost Wild West abandon.

Think of the more modern death/thrash or black/thrash sounds adopted by Swedish bands Witchery, Maze of Torment, Bewitched, The Crown and their ilk, and then season them with the more rustic Norwegian tones of Aura Noir or the latest records from Darkthrone. Liberally add a positive sense for lead dynamics that incorporate classic heavy metal influence, and you've got a stunner of an album that is both fist raging and intensely fun. In fact, the deeper into Head Up High you dare to tread, the more rewarding the experience becomes. Not that the initial tracks like "Mind My Step" and "Head Up High" are necessarily bad, for even these are among the best black/thrash I've heard this year, putting the latest Witchery album to shame. But let's just say The Batallion have not front loaded the big guns on their warship this time around!

Once the turrets of "Within the Fame of the Graveyard" explode their shells across your face, the album becomes enormously entertaining, with riffs like a more polished Aura Noir, harsh barking vocals and boundless momentum, not to mention the highly impressive lead sequence around 2:30 in the track. "Thick Skinned and Weatherbitten" continues this trend, excellent but simple old school thrash metal guitars breeding forceful unrest, hammering through each riff pattern like a crew of undead Civil War soldiers intent on finishing what they started. "20 Paces to Death" is another stomper with impressive leads and flawless riff cycles, and the final trio of the album: the Hellhammer meets dirty speed of "Where There is Smoke There is Fire", the steady bombast and bizarre vocals of "The Roaring Grandfather", and the ripping punk/speed of "Bring Out Your Dead" should secure the impression that you've just been fist fucked mighty hard by the spiked gauntlet of old school perdition.

There are flaws here, minor nicks in the bullet belt strewn leather armor of The Batallion that hold it back from complete praise. Stud's vocals are excellent, but they do become monotonous in a few of the verses. The style of the band is obviously not even hinging on unique, but for what it's worth, they mix up the various influences nicely. A few of the songs near the beginning of the album are not as memorable as those deeper in. All of this considered though, Head Up High is still an album well worth owning, a lovable visitation to the realms of the dead if not forgotten tones of the band's influences, thrilling through a large number of spins. It's easily better than the band's debut Stronghold of Men from 2008, so if you fancy a blast from the past in the face of the present, have at it.