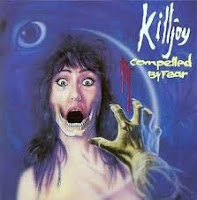 After the initial dissolution of his best known band, the horror/death legend Necrophagia, the prolific Frank Pucci (aka Killjoy) would try his hand at the formation of not only one, but two new bands. Both were short lived, both featured largely the same lineup, and both released only one album, Cabal continuing in a mix of death and thrash metal somewhat removed from the Necrophagia sound, and his self-named Killjoy performing fairly straight thrash with a Bay Area slant to it. Neither of these would be numbered among his better records, but of the pair, I'd have to grant Cabal the slight edge.

It's hard to draw a direct comparison with any of the better known thrash bands of the time, and as of 1990, Compelled by Fear was moving in a fairly fresh direction, but there are some similarities to early Testament or occasionally the harder hitting Dark Angel, but Killjoy's charismatic vocal presence shifts through quite a few terrains, from a Chuck Billy delivery to Acrophet to a more street-savvy crossover presence. The songs are very riff driven, and some of these are well written if ultimately forgettable in a year that brought out albums like Realm's Suiciety or Artillery's magnum opus By Inheritance. The guitars are quite crunchy here, and occasionally attempt to breach the realm of technical thrash, a style that seems flush with Pucci's lyrics that skirt the subjects of psychopathy, nightmares and dementia.

There are not many individual tracks which stand out here, but they do manage to avoid the pitfall of monotony, each written with fluid, percussive power and decent leads. "Fall From Grace" erupts with raging guitar triplets, well placed breakdowns and gang shouts, while "Frozen Refuge" offers a thick crash course in dynamic thrashing with some passable riffing and unique vocals. "Infected" batters like a mix of Sacred Reich and Znowhite, and "Faith Against Faith" feels like a piece off of Testament's debut The Legacy with a spurt of Necrophagia's charm in the vocals. The remainder of the album is consistent with this selection, always offering a thick breakdown or spike of melody and atmosphere in a bridge sequence, but never becoming too distinct or memorable.

Compelled by Fear is highly unlikely to please anyone who doesn't get excited at the prospect of some passable thrash band they never heard in the 80s, but nostalgia is sadly it's only forte. However, unlike many incompetent 2nd or 3rd string acts in the late 80s, Killjoy clearly have a grasp on the style of composition they were after. Thus, nothing here is too bland or offensive to the ear, there are simply not enough hooks that sink deeper than a listen or two, and the production and songwriting do not rival the Cabal LP, and this band displays only a fraction of the charisma found on the Necrophagia debut. Worth listening to once or twice if you fancy Pucci's work or generic thrash in general, but nothing more.