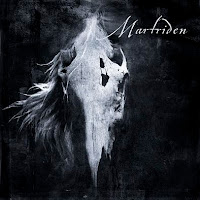 Martriden is one of the better up and coming bands out of Midwest America, performing a delicious mix of melodic black and death metal with a tasteful penchant for grooves that never grow tired upon the conscience like so many of the awful metalcore and deathcore bands our country is spitting forth this past decade. It's also a little hard to pin their sound down. Surely you'll hear a little of Emperor in their sweeping overtures and sweeping leads, with a bit of Morbid Angel or Deicide in the vocal delivery, but the band's slow and rolling momentum conjures a dread majesty over brick house chugging not unlike Fear Factory or Meshuggah. The real strength is to capture these various elements and then from them, craft potent songs that each stand on their own and offer rewards on multiple listens through.

The band also benefits from enormous production values that put most professional, better known artists to shame. Even as far back as this s/t debut EP, the guitar tones are perfectly thick and bruising, the leads cutting straight through, the rhythm section present and powerful, and the barking vocals mixed just above the primal force that powers the band. These are not complex compositions by any means, but the band delights in just the proper balance of melody and brutality to capture the ear and not let go despite some of the tracks being 7 minutes plus. Martriden features four tracks not available on the later, greater albums (The Unsettling Dark and Encounter the Monolith), so it's well worth hunting down through Siege of Amida for that reason.

"Blank Eye Stare" creates steady bombast with the double bass and darkly escalating guitars, streams of melodic chords ringing out against the thrashing fist of the rhythms, like a pendulum of punishment. There's an acoustic segue serving as centerpiece here, gloriously executed like something In Flames might have done back in their heyday of the mid 90s, with some fine double leads. "The Art of Death Infernal" opens like a more aggressive Death, proceeding into a killer old school death metal drive in the verse, drums thundering below with a churning stride, while "In Death We Burn" incorporates tasteful melodeath guitars into perhaps the most memorable and satisfying piece on the EP, if you don't mind this style. "Set a Fire In Our Flesh" opens with a calming segment of bluesy guitars and atmosphere before the pendulum returns, circular riffing that can stir madness from within the listener as the double bass rolls below, plus a pretty sweet riff at 1:30 beneath the keyboard.

As a demo or debut EP, Martriden is quite exemplary, with sound quality that should have immediately stirred the interest of labels and fans alike. I wouldn't number these compositions among their very best. They go down smoothly, with suitable force, but there are certain individual riffs here that seem a little dated or familiar due to their similarities with bigger groove metal acts. However, the Montana band deserves credit for dressing these elements into a sustainable medium, never fickle or quite forgettable, and its great to see how they expand upon this process over the upcoming albums. Martriden is by all means a 'modern' metal band. They don't dwell in the 70s or 80s, taking only rudimentary queues from the 90s, so those who wouldn't touch a Meshuggah, Gojira, Daath, Mnemic, or the more modern works from Morbid Angel, Nile and Fear Factory might be put off by the clarity and general accessibility of the content, but this is nevertheless a fine introduction to a fine act.