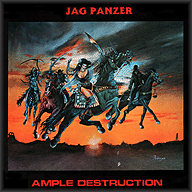 From a dull thud to a roar, 1984 would see the Panzer patrol achieve one of the very best traditional/power metal albums in all US history as they stepped into the studio to knock out their timeless offering to our delinquency: Ample Destruction. This is anything but elegant metal music, but it manages to capitalize on every strength of the 1983 Tyrants EP. The production has been polished, the riffs are improved, and the 'Tyrant' himself has managed to trump his prior performance, reining himself somewhat but still delivering a varied and unforgettable array of siren calls and soaring testosterone. The man is easily a match for a John Arch (early Fates Warning), Lizzy Borden or Joe Comeau (Liege Lord's Master Control), and he lends this effort an enormous appeal which was virtually unrivaled in this country until a few years after the fact.

He continues to mirror his UK counterpart Bruce Dickinson, and yet this is only when he fares in a particular range. The rest is pure Conklin. Fates Warning's Night on Brocken also comes to mind when drawing a comparison, yet the music of Ample Destruction is clearly superior to that record (which was released the same year). The riffs are bad ass American metal, clearly derived from your more street level, blue collar NWOBHM acts or the German pounding of Accept, but then scoured with spikes and blades of melody that easily helped to push this genre forward and never in reverse. The musical core of Mark Briody, John Tetley and Rick Hilyard were joined here by guitar guru Joey Tafolla, yet you'll find no excess of shredding indulgence beyond what is simply required of each track, carefully glazed in delightful, epic melodies that catapult the music beyond the steelyard and into the stratosphere.

If "Licensed to Kill" does not immediately get your heart raging and pining for the sounds of unfettered 80s heavy metal, I don't know what will. Congratulations, you are officially a poseur. Hang up your tights and go hang out at a yogurt bar with your Blackberry and $60 hairstyle. Frenzied, charging riffs moored by a solid rhythm section and Conklin's characteristic howling that utilizes both an acidic bite and a venomous bark, great leads and only 3 minutes to get your ass kicked by the next track, "Warfare", which is one of the most memorable and hilarious the band have released, with a stock NWOBHM rhythm akin to an "Am I Evil" or any number of Priest tunes, anchored by the Tyrant's extended versus that radiate charisma, before the ultimate gang shouts of 'warfare' by the band, enveloping his shrieking. A true highlight of fist shaking, head banging rapture.

Trample the cities leaving dust in our wake
Not a thing left alive, run before it's too late
The women, the children, the young and the old
Nothing will escape the Panzer stronghold

Laughing. My. Fucking. Ass. Off. Directly into the surge of the "Symphony of Terror", with its galloping momentum, elevating chorus vocals, squealing fills and a truly Maiden atmosphere, just a lot angrier. "Harder Than Steel" joins "Warfare" on the highlight reel, with its glamorous flowing melody that is almost impossible to escape, especially when dowsed in Harry's phrasing follies and the rich, full production that resonates across the nightscape of your childhood. "Generally Hostile" is a bit more sparse in nature, crashing along in due course but loaded with more epic guitar leads and a pissed off finale of the band shouting 'no mercy'! "The Watching" rocks along with delicious, almost folk like grace and powerful ballast, the chorus once again reminding me of something Maiden might have written in their heyday, if they were all adorned in black and spikes. "Reign of the Tyrants" channels some speed metal and cussing into a hard ass chorus glazed over with ascending melodies.

At this point, I do feel like the record takes a small dip in quality. "Cardiac Arrest" is every bit as intricate as any other track on the record, but for some reason I simply can never remember it, there is no single element of rhythm here that draws the ear, not even the tiny screaming teaser leads that herald the final verse. "The Crucifix" was originally intended for the Tyrants EP, a moody and slower piece than one is naturally accustomed to from Jag Panzer in this era, and it takes some time to truly develop into something special, after a mediocre middle sequence. The organs and vocal choir that serve as an intro are lovingly rendered here, and I did like the clean guitar, synthesizer and emotional, folkish vocals Conklin uses before the 2:00 mark.

I can think of very, very few USPM albums that I would hold in higher esteem than Ample Destruction, and most of those would have the names Fates Warning or Lizzy Borden attached, or maybe Riot's Thundersteel. It is astounding just how well this record holds up to the ages, sounding nearly as fresh in 2010 as 1984, and this is all due to the devoted songcraft and vibrant production values that were poured into it. The balance of simple rhythms and quality, proficient leads is undeniable, and this is easily my favorite performance in the recorded studio discography of Harry Conklin. This naturally would have been followed by the original Chain of Command (which didn't get a final release until many years later), but various complications forced the band into hibernation until the awful sophomore Dissident Alliance, which is not even worthy of devouring this record's steaming defecation. In fact, nothing else Jag Panzer will ever record can match this album's permanence, and I expect you all to do your part and own this.