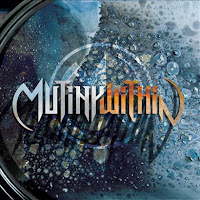 Mutiny Within is just the latest in an ever increasing cycle of trend bands signed by a label like Roadrunner Records in their unending, desperate appeal to the masses, and the almighty dollar sign. Though the band itself was formed in 2002, and cranked out a number of demos since, they have ultimately arrived at the same metal lite, disposable platform of the artists they emulate: Killswitch Engage, God Forbid, The Black Dahlia Murder, All That Remains, etc. You'll also hear the clear nods to In Flames, Dark Tranquillity, and even a little Nevermore here in the thrashing, modern technique of the guitars and one of Chris Clancy's myriad vocal personalities, but it seems every time this New Jersey outfit has the head pumping along in appreciation, it seems as if they are contractually bound to poop all over themselves and fuck it up...

Let me make this clear: if Mutiny Within cut out about 25% of the elements found on this album (the trendy, weak ones) you would have a competent if forgettable onslaught of modern melodic death/thrash which would have Nevermore and Soilwork fans touching themselves in all manner of fond places. However, that is simply not the case, and the excellent lead efforts and versatility of the riffing and keyboards seem to be lost here, yet another album that all the MySpace fans will forget come next Saturday when the next hot ticket arrives at the Hot Topic. It's really a shame, because if you look at the band's history, numerous line-up changes, it is clear that these are folks who have persisted at their career...only to arrive at this?!

First off, the vocals are far too schizoid. Not schizoid in that they sound entertainingly insane, but schizoid in that Chris Clancy takes too many styles on a test drive. He must literally be using a dozen different voices on this album, including heinous Good Charlotte, My Chemical Romance radio rock chorus style and some of the worst US metalcore growls I've ever heard. He needs to pick a few and just stick with them, because its incredibly fucking distracting. For example, on the song "Falling Forever", he proves he would have a pretty good power/prog metal voice, with a little bit of constipation in there that hints at decent anger. But even here he botches it up with throwaway melodic radio chorus parts. Is this American Fucking Idol? Are you Chris Daughty or Adam Lambert? Or both? in "Images", he lays on harmonies with himself, but sadly these are undermined by the really generic metalcore barks. The tragedy is that the man can actually sing, and I wish he'd pick a straight up, bad ass metal voice and stick to it.

Next, the music itself, while undeniably competent (especially the guitars) is the kind that is too quickly forgotten on contact. They know how to carve out a melodic outbreak that feels soothing and pleasant to the ear while being a strenuous exercise on their hands, i.e. "Images" or "Undone", the latter of which seems like a modern Dark Tranquillity track. These guys are far better riffers than peers like Killswitch Engage and the all too sucky In This Moment, but aside from that cheap and brief uplift you feel when you turn on the radio and hear the latest pop-punk sensation, there is just no one home. I feel like a little more inherent darkness and anger would do the band good, not just through mosh rhythms or anything like that, but carry those Gothenburg influences or the Nevermore-like riffing to its logical end, aggression, instead of making 'light' and 'pretty' with every damned song on the album. "Suffocate" is an example of a positive direction, a track that might have fit on This Godless Endeavor or Enemies of Reality, with cyclic, complex riffing and a few of the less annoying vocals on the album (though even this suffers from the radio syndrome).

There is a lot of talent hiding under the trendy facade of this band, if only it could be harnessed in a direction that wouldn't immediately escape the memory five minutes after impact. If they could cut out the disease of wanting to be 'big' and 'offer something for everyone' including the 14 year old schoolgirls that must think they are the hottest thing since Rose Funeral, then we might be onto a killer band. I'd like to hear Mutiny Within write a straight power/prog or melodic death metal album and kick some ass, because I've no doubt they could contribute to the growth and persistence of metal music rather than fall into the desperate cash grabbing of poseurs while the going is hot. I threw up in my mouth at least once per track here, and my teeth and tongue are as unhappy as my ears.