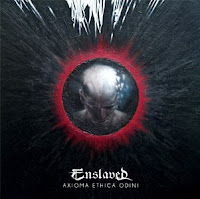 While many did not take to the Norse legends' previous effort Vertebrae, I found it a flawless presentation, a proof of concept to where the band had been steering for a great many years as they grafted a myriad of progressive rock influences into their core Viking black metal aesthetics, exploring their culture and roots in ways few if any bands had dared to tread. I still listen to that album on a regular basis, along with many in the band's history, yet they've already delivered a follow-up here that will also serve me for many years to come, a step backwards and forward simultaneously. Yes, Axioma Ethica Odini has a clear possibility to reinstate those that were dispossessed with the prior record (their loss!), as well as continue to breathe new life into the band's evolving mythology, as a wealth of new fans are bound to pour through the floodgates.

This is a heavier record than Vertebrae, and as I have said, somewhat a step back to other records like Ruun or Isa, in that the band better envelop the progressive rock influences of a Pink Floyd, etc. with more aggressive guitars. However, at the same time, this has the best clean vocals of any Enslaved effort to date, and the consistent lineup here (now four albums deep) ensures that this is perhaps the most coherent writing and execution of their career. Many have complained before that the harsh and clean vocals of the band created a bizarre dichotomy that did not sit well in their ears, and while I've never had this problem myself, I feel like the naysayers should be pleased here, since they are fused together wonderfully. The guitar tones here are brilliant, thick and punctual while incessantly manifesting mood through the well placed chord changes, and Grutle's bass and Bekkevold's drumming are likewise impressive, tethers to the world of iron and bloodshed that the band's dream-like vistas threaten to escape.

You're still running the gamut of the band's sonic exploration here, with numbing, Roger Waters style vocals and an almost jazzy undercurrent to some of the guitars, but Axioma Ethica Odini offers to steer this into newer, bolder territories. "Night Sight" offers mellowing folk extractions that loosely congregate to the foothills of a gathered storm, erupting into a brilliant sequence of jarring rock guitars and then the escalation of granite through earth, as if a mountain to were rise straight from the crust, rather than wait out the millenia for the natural process of erosion. "Lightening" circles about one of the most eerie and fluid guitar riffs the band has written before it slams you straight in the chest with sheer melodic force. "Giants" emphasizes strong Sabbath influence, organs grazing in the distance before the elevating, trippy verse that yet again births a thundering depth and force, as if the leviathans of the title slowly strode across a primordial landscape. "Axioma" itself is a brief yet scintillating, proggish ambient piece, quirky little guitars and echoing narrative placed against the searing, lush synthesizer.

Of course, this wouldn't be an Enslaved record without a few more glorious, direct undertakings, and these populate the rest of the album. "Ethica Odini" transforms from creepy, creaking intro to a surge of driving if predictable chords that foster a highland majesty in between the wild and mighty guitar fills inextricably linked to the soaring cleans. "Raidho" seems a little less stunning at first, but once it builds to the clean/snarl trade-off at its core, you can feel all the pieces to its puzzle locking in step and rapture welling inside the chest. "Waruun" steps carefully, as if through a landscape of sharp rock, creepy chords ringing off against the rhythmic undertow, a minimalist intent betrayed by the sheer sense of adventure this band provokes, while "The Beacon" plays it fairly straight with savage, driving force and another dreamy bridge sequence. "Singular" builds calm but cresting onslaughts of guitar, clean vocals coming at the peaks of waves and the listener can feel the temperature shifting with each rhythm, easily the most interesting guitars on the entire album.

Considering the stunning level of grace and power the band balance here for nearly an hour of playtime, I have had no choice but to become increasingly absorbed into the longing flood of emotion here that achieves almost mythical proportions. My first few runs through its content were met with mixed levels of adoration. I felt it was a far less dry sound than on Vertebrae (which never dulled my appreciation), but wasn't sure if it took me to quite that same level of investment. Having now listened through over a dozen times, finding new steel glinting upon the curves of each consecutive dive, I can once again see that the band have managed to carry the essence of their entire discography forward into a new clime, not shedding their former skins but devouring them, like fine chefs so confident with their previous culinary masterpieces that they have no choice but to once again define themselves, best themselves and blow the tastebuds of every attentive glutton that walks through their kitchen doors. Axioma Ethica Odini deserves top honors. The fact that it is not the first Enslaved album to achieve this is testament to the band's commitment to music above all else. To greatness.