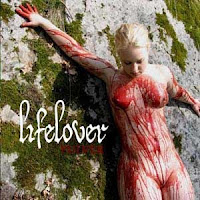 Pulver is perhaps the most futile of albums to critique, since it's hard to believe anyone of the male (or possibly female) persuasion could tear their eyes away from its interesting cover image long enough to read something pertaining to the musical contents, but it's not as if anyone could really blame them. The cover is striking on more than just a sexual level, and I'm sure it didn't hurt the Swedes' chances with this interesting if flawed proposition of hybrid sounds. Basically, Lifelover mix the driving, desperate melodic doom of a Katatonia with tortured, wandering vocals courtesy of the enigmatic ( ) (see also Hypothermia) that best represent the depressive black metal schemata, and through this they drive the stakes of earthy folk and rock influences, with some even more interesting curve balls in store for those willing to delve deep inside its unusual depths.

Pulver opens with two of its strongest songs, so the attraction is very quickly felt for what the band is attempting to create on their debut. "Nackskott" favors a meandering, surf/folk guitar line above which ( ) introduces you to his surly and characteristic pain, scraping a number of registers until the intense bridge of the track which most closely resembles black metal. The track ends with a sample of what I'd assume to be a child's TV theme or folk song in Swedish, creating this unusual disparity. Following is "MS Salmonella" with its driving melodic doom chords and piano overlays (a trick this band will consistently manifest on later work like the strikingly similar "Shallow" from the excellent third album Konkurs). One doesn't really expect the gunshot and screaming samples to erupt into a Celtic Frost groove, but there it is, and thus closes the most consistently impressive chapter of this record.

Apart from these, I was greatly enamored of "Söndag", deeper into the track list, a circular melodic doom track which channels a simplistic Paradise Lost pattern of chords into blissful hopelessness, ( ) careening over its wide channels of sorrow like a galleon of distorted emotions. The lush piano intro to "Kärlek - Becksvart Melankoli" is waylaid by another driving sequence of cleaner guitars, nearly silent programmed drumming and extremely angst-ridden vocals, but it at least offers a few moments of potential. There are also a pair of intriguing interludes found in the roiling, evil noise swells of "Medicamannen" which are offset by the folk and conversational samples, and the turbulent funeral ambient tones of "Avbrott Sex", a melancholic piano striking out across them as if you weren't already creeped out enough. "Stockholm" is another track to use the surf-like, bouncing folk guitars and some delicious, subversive bass, so add this one in the plus category, and the acoustic/piano fusion of "Herrens Hand" is soothing and strange with its samples.

Sadly, the remainder of the effort is not so compelling. "Mitt Öppna Öga" starts off with a decent melodic thrust, but once the sex samples arrive the track has already played out its interesting nature and becomes sour. "Vardagsnytt" bounces along with some of the sillier vocals on the record, but the chord pattern below is bare of any essential atmosphere or patterns. "Nästa Gryning" goes for a dreamy sequence, the vocals ringing out distantly across Romantic parlor tricks in the clean chord selection, but ultimately fails to thrill me despite the 6:25 minutes it spends trying, and the closer "En Sång Om Dig" is a slovenly wreck that might have just been clipped from the recordings and none would be at any loss whatsoever. Other complaints I've heard are with the production, but I must disagree there. The tinny silence of the drum beats is a delightful counterbalance for the thicker broth of emotional range created through the vocals and dirty guitar tones, and the lo-fi quality is welcome as it is with many more traditional black metal acts.

Pulver was a unique experience for its day, but one that Lifelover has consistently trumped with the rest of their output. Considering the experimental attitude of the band, it surprises me just how much of this debut I do hear in the later Konkurs. Then again, the band were on a spree of one album per year so the smaller, natural evolutionary steps make sense, and the wealth of this style had yet to be shaken from their collective systems. I truly enjoy 2-3 of these songs, namely "Nackskott" and "Söndag", and they are not without interesting companions here, but enough of the material drags its feet on the bottom that the album has difficulty finding a smooth current to sail. It's an intriguing vessel to visit, but I rarely feel the urge to stay aboard for long.