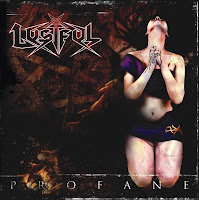 12 years is certainly a long time to wait for a follow-up album, but for whatever reason, Lustful's Profane came out after such an extended hiatus. Their debut, The Almighty Facets was probably not a high impact effort due to its primitive recording and the ease with which any underground band could get lost in the death swarm of the 90s. The band were not completely inactive in the interim, having contributed to a Sarcófago tribute in 2001, but original members Freddy de Marco (guitars) and Rodrigo de Carya did eventually to their beloved brutality, surrounding themselves with a new arsenal of power players like guitarist Fernando Fernandes (who sadly passed away last year) and entering a studio to grind out their sophomore Profane.

Naturally, this album features a huge leap forward in production over the debut. The raw, ruptured turbulence of those uneven guitars is here replaced by a crushing, modern edge that feels like a thousand blunted axes beating in the doors of an old woodshed, with some innocent victim trapped within, in a state of total terror. The vocals are similar, but less of the grunt belch and more of a more bloody, rasping tone. The bass is not highly distinguished on this recording, lost beneath the sheer savagery of the guitars, but the drums completely kick ass over the debut, a swampy rage storm that will simply not allow the listener to drift off, whether they are grooving along in a rock format, blasting off or hammering the toms. Lyrically, the band continues their path of blasphemy, here focused centrally on the lies and fallacy of Christian or other organized religious mythology.

Like the debut, Profane opens with a creepy intro, a ghostly female vocal line over the sounds of crunching ambient warfare, soon battered in with the pummeling drums and old school chagrin of "The Dogma Child". It's a delightful mesh of Morbid Angel and Deicide aesthetics with a whiff of Swedish savagery, but the band are not devoid of a melodic sense and here the bass is actually quite virile, popping and plunking along below the violence. In a way, the band feels a little closer to their countrymen Krisiun here than on The Almighty Facets, but not too close for comfort, and Lustful relies more on dynamic range than that other band's straightforward, take no prisoners blasting. There are quite a number of songs here, one more than the debut, and while a few are brief, simplistic bursts of ghoulish sacrilege like "Killing Whispers", "Fetish" or "T.R.S.O.T.W.", most are quite reasonably structured. Favorites include "Masquerade in Hell", with a horrific intro transforming into slow rhythmic escalation into vile and crude death thrashing , the warlike grooves of "When God Died" which recalls a South American Slayer on a killing spree, and of course the closing title track "Profane" with its seductive samples and eerie, slow paced spiral of damnation.

Profane does lack some of that nostalgic appeal of its predecessor, but that is only to be expected here, since the band is leaping into the 21st century with production standards they only wish they had back in their formative years. Musically, there is just no contest; this is by far the superior of the two albums, with more standout riffs per track and a fresh, aggressive tone that I'm surprised has not turned the heads of more death mavens. If you're into South American death like The Ordher, Queiron or Krisiun, then I truly recommend you check this band out. They may not be as extreme in their delivery, but they are capable of evoking sufficiently dark internal spaces through which their riffing crashes and thrusts the spear of attrition into the listener's ear canals.