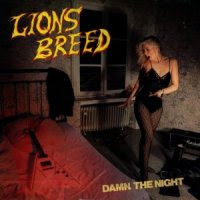 The name Lion's Breed will probably not be familiar to your average European power or speed metal fan, but I'm willing to bet any connoisseur whose listening credentials travel beyond Hammerfall and Dragonforce will have heard or read of the Scanner, who have an important connection to this band, being that they were one and the same. Core personnel Axel Julius & Thomas Sopha (guitars) and Martin Bork would abandon this moniker after only a few years, switching the handle to Scanner and embarking on a more unique, science fiction lyrical venture. Certainly there is no shame in this maneuver: Lion's Breed is a pretty sweet band name but it doesn't exactly match the subject matter the boys were interested in pursuing, and though the styles of the two bands were comparable, Scanner was far more distinct against wealth of the German scene, whereas Damn the Night is little more than listenable.

Well, let me correct that. It's more than listenable. In fact it's a pretty sweet record if you like your stock 80s metal. The riffs are extremely tight, the leads adequate and the ability to conjure a beautiful period in traditional metal music remain intact 25 years after the fact, but the album does occasionally suffer from one critical setback: Ulrich Rohmann. Rohmann does not have the wild, screeching pipes of a Michael Knoblich or S.L. Coe, the first and best screamers in the Scanner discography, and thus he keeps his performance reined in. Too reined in, in my opinion, and on a few of the tracks he seems merely a nuisance in the way of your experience of Julius and Sopha rocking out with some riffs that would make their forebears Judas Priest and Accept very proud. However, you probably shouldn't go into this expecting the Scanner level of forceful, melodic surges infused to traditional territory. Clearly there are similarities, but these guitars are hardly as inspirational or powerful.

The album thus works best when it reaches into its most bad-ass territory, ala "Neon City" which bears a slight likeness to "Neon Knights" or "Breaking the Law" with an injection of early Accept, the one major difference being the less impressive vocalists (and this is one of Rohmann's best performances on the album). "Lady of the Night" gets spiky, playful and melodic with the guitar lines, and they actually remind me of "We Are Not Alone" from Scanner's sophomore outing Terminal Earth, just not as well realized. "Sea Rover" actually runs along side countrymen Running Wild with that same sense of pirate/motorcycle frenzy driven by a nice bass lead-in and some bad ass if predictable, bruising chords; while "Valve of Hell" (great song title) is sorcerous melodic fare which should appeal to fans of Dio or Warlock. "Mystery Game" has a few seconds in which Rohmann shifts the pitch far up the scale, with mixed results. Others like "Heavy Current", "All Night Be Damned" and the plodding "Live and Let Die" (no relation to the Paul McCartney classic) are likewise suitable, if ultimately not more than just good old metal, and

Outside of Rohmann's occasional foray into the underwhelming, Damn the Night is an album that should satisfy anyone seeking out a standard but well executed mid-80s record, or following up on obscure bands derived largely from the NWOBHM classics. Or curious to hear what the mighty Scanner evolved from before releasing their joyous Hypertrace or Terminal Earth. With a kick more energy, and a better vocal performance, this might have created bigger waves, but I'm not sure the song writing is quite at the level of a true classic if even these changed had been spun into reality. Almost all the songs are enjoyable, but it's clear a change needed to be made, which the band did at warp 7, striking far and deep into the star-filled void of our hearts and imaginations.