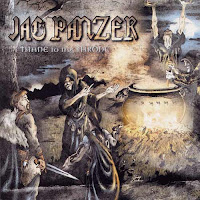 There are a great number of Shakespeare's works which are well suited to adaptation into unexpected mediums, but when one really examines Macbeth, its transition into a heavy metal concept album seems only natural. Death, betrayal, paranoia, and dark magics are all common themes in a myriad of the genre's categories, and who better to tackle this topic head on than a band which by this point had already tucked a few decades beneath their collective belts, and were seeking new ground to cover, as evidenced by the 1998 album The Age of Mastery and its varied leanings. What Jag Panzer only hinted at there, they find themselves diving into here in full creative bloom, transforming the haunted landscape of the tale into a raging and glorious epic of traditional power metal.

That being said, Thane to the Throne is not among my favorite Jag Panzer works. It shows tremendous accountability to its source material, a solid array of songs which suit its genre, and yet it ultimately fails to stand out beyond so many other albums in this field, despite a ribald effort. Part of its consistency is no doubt due to the solidified lineup, the first time in the band's career thus far that they've maintained their roster, unbroken, from one album to the next, and they feel like they've truly gelled and grown together here, the material written with the sure hand of a veteran. I was also impressed that Conklin explores so much of his mid range vocals on this effort. He'll still screech to the rafters when called for, but dabbles primarily in an honest, expressive tone which occasionally reminds me of Blaze's work with Maiden, only manifested with a thousand times more quality! Serving as your first person narrator for the characters' interactions from the play, he is adept at capturing the appropriate levels of desperation and madness implicit in the play.

What could have been an endless sequence of intros and interludes to herald each of the metal tracks is thankfully not the case here: the meat of the record is all metal, almost all the time, and thus much of the 65 minute playtime is spent banging the head to elegant power rooted in the British origins of the form and the spry melodic muted patterns Jag Panzer is so fond of from the last two albums, The Fourth Judgment and The Age of Mastery. There are a few short interludes like the classical guitar of "The Premonitions", the violin, piano and vocals of "Banquo's Final Rest", and the bells, chimes and atmosphere of "Requiem for Lady Macbeth", all of which suit the surrounding material fine, but these are kept brief and the album doesn't suffer from an excess of such pieces, as some might claim of a Nightfall in Middle-Earth.

The album follows the progression of the play, each of the tracks slowly building a sense for faded glory and frustration through the narrative of the guitars and vocals. "Thane of Cawdor" elevates from percussion and Enya-like vocals to strings and ultimately the slow, plodding power metal which is part soaring anthem. "King at a Price" returns to the familiar environs of the previous few albums, and "Bloody Crime" sees Harry in his higher range with a well crafted lead sequence. In fact, the leads here are in general superior to the aimless shredding that dragged down a few of the tracks on The Age of Mastery. Broderick and Briody have very carefully laid out each piece to match the brooding, serious structure of the tracks. Sadly, though all of these songs show moments of grace and promise, one must reach deeper into the content to find something that eclipses mere potent pleasantry and gives us the Jag Panzer we desire.

"Treachery's Strain" is a marked improvement, with some choppy, complex rhythms and arching vocal lines, and "Spectres of the Past" does one better, the first song on the album that I felt lived up to my favorite material of the reunion lineup, all swollen melodies and pumping bass. "Three Voices of Fate" sees Conklin inserting a Dickinson (and Bayley)-like fury to the narrative, and "Hell to Pay" has some appreciative, glinting melodies that roll along like the hills of the Old Country, descending synth-lines falling across the overcast skies of the tale like early snowflakes. Deeper still, we get the creepy, cavorting of "Insanity's Mind", with John Tetley's bass plucking each strand of reason out of the characters' minds, and some superb siren-like vocals. Other gems include the epic chorals of "Face of Fear", the raging mirth of "Fate's Triumph" and the steady bliss which anoints "Fall of Dunsinane", though I felt the finale "Tragedy of MacBeth" a mildly bloated, if suitable conclusion.

Thane to the Throne is likely the most difficult material Jag Panzer has ever had to concoct, and the band deserves some credit for such a full-bodied, flesh out adaptation to the material. The quality is consistent, the breadth of instrumentation commendable, but outside of the whole, very few of the tracks stand out as superb or inspirational. None of the compositions will have you clutching your knees in awkward despair. In fact, the material ranges from inoffensive to good, to occasionally something more, but I have always found it bizarre that this most ambitious effort, despite its high level of professionalism and effort, can at its best only wallow in the tall shadow of the legendary Ample Destruction. However, I must point out that this is truly the de facto interpretation of the Macbeth material, perhaps all of Shakespeare, into metal music, vastly outclassing other lame attempts like the flimsy Italian Gothic metal band Macbeth. It's a solid album that I will occasionally spin in culmination when revisiting the band's catalog, but there are few individual tracks that I count among the band's best.