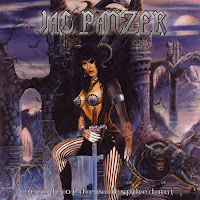 So the laughable seductress who graces the covers of Jag Panzer's much-beloved classics Tyrants and Ample Destruction would return once more, this time for a collection of re-recordings titled the Decade of the Nail-Spiked Bat. Now, I like nail-spiked bats, they were a weapon of choice in my thrash years as an 80s teen, complete with denim jacket with sawed-off sleeves, bandana, cut-off leather gloves and hi-top sneakers, essentially representing any random thug from a Police Academy film. Such an album title could only bring about baited fondness and nostalgia for the era, until I heard the contents and realized what this was all about.

The original intention of the band was to re-release their earliest material with new packaging and make it readily available to a fan base of younger or newer fans who might not have had exposure to their greatest works. Unfortunately, due to some difference or financial stipulation with former guitarist Joey Tafolla, this could not come to fruition, so the band just decided to re-record it all, tack on a few new other unreleased gems and release it as a two disc fan package. The downside to this is that the band clearly were not in the same head space as they were in 1983-84, and thus the revisions of the material lose a lot of the charm of their initial versions, rendering this almost completely worthless when you can track down the re-issue of the originals directly pressed to CD.

What's worse, is that this is no way some complete recreation of Ample Destruction or Tyrants, because there is material missing, material inserted from the unreleased Chain of Command album, and in general this is just a mess. The modern production feels almost unfinished, as the band have not attempted to morph any of the material into a state flush with their recent albums like Thane to the Throne or Mechanized Warfare. It might have been interesting to hear the material upgraded to such standards, but instead this feels like a watered down and less inspirational alternative. I don't think there are more than 1-2 revisions to the old tracks here among the 20 present that I would prefer to the original, and it's a sad thing to hear a song like "Warfare", "Iron Shadows" or "Licensed to Kill" reduced to such a dull medium, even if the band do not technically make many mistakes. The youth has faded. The life bar drained from these compositions, and the corpse lying festered and exploited, spent condoms thrown haphazardly about the scene.

All of the Tyrants debut is present, including the additional track "Towers of Darkness" that was later added to the EP, but not a single one of the five tracks is given any burst of life, any modern infusion or evolution. They are performed adequately, so its good to know the band could still pull them off live, but Conklin's vocals are simply not up to the task of his storied past, at least not on this recording. What sounded brash and fresh now sounds gimped, and that is certainly not acceptable for the long term fan. Most of Ample Destruction also made it to the track list, with the exception of "Harder Than Steel" or "Cardiac Arrest", and the tracks are all mixed up order, so no, this is not some fan friendly packaging that simply seeks to service the new, negligent fan, but a sordid compilation. The unreleased album Chain of Command is also represented here through "She Waits", and though the original mix of the song is not great, I'm not sure if I find this new take all the more compelling. Regardless, Century Media will be issuing this album in full just a year after Decade of the Nail-Spiked Bat, so what is the point.

Probably the most worthwhile material found in the package would be the re-recordings of the rare demo track "Fallen Angel" from the 1985 demo, or the three Dissident Alliance tracks with Conklin's vocals, which as a given sound immeasurably superior to the Conca-fronted originals. "The Church", "Spirit Suicide" and "Edge of Blindness" are all included, and though the updates do not exactly render them 'good', they are certainly more acceptable, especially the "Edge of Blindness". "Forsaken" is also included from a Metal-Rules.com compilation, but its a pretty dull tune that is not on par with either the band's 80s work or their recent, 21st century spurt. On the other hand, "Black Sunday" is a decent, rare track worth hearing.

Often a band will release one of these re-recorded fan packages of note, like the Iced Earth collection Days of Purgatory, which I surprisingly enjoyed despite never much cared for that band in general. Few can ever really match the energy and intent of the original conceptions, though, and most of Jag Panzer's offering suffers from the 'so what' syndrome. There is no way in a million years I would ever opt to hear this over Ample Destruction or Tyrants, which remain the band's two best recordings to date, and thus Decade of the Nail-Spiked Bat feels like so much needless ballast on the float. It's unfortunate the band could not come to terms with Tafolla, because surely that guy had little on his plate in a time when shredders are about as passe as shoulder pads and Strawberry Shortcake (the cartoon and toy line, not the dessert). Alas, this was the band's means of coping and offering something to their fans regardless, and with the exception of the rare track here or there, it truly comes up short.