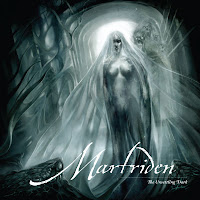 After the band's Martriden EP, there was no doubt a feeding frenzy of interest due to their highly professional, polished pedigree of the Montana band, and thus it is no surprise that Candlelight Records licensed the band's debut full-length album from Siege of Amida for release in the North American territories. The Unsettling Dark is a direct continuation of the musical ideas put forth on the prior EP, so you can expect a lot of unhallowed, massive atmosphere affixed to the primal battering of the drums and rhythm guitars that tend towards the more basal, chugging elements of the spectrum. This atmosphere arrives in both the near constant use of synthesizers against the backdrop, and the melodies shot off across the bough of the moshing torment.

This also marks the beginning of Martriden's fixation with conceptual themes that run though the course of their albums. Here, of course, we are dealing with fate, death and purgatory, while the later (and somewhat better) Encounter the Monolith deals with more cosmic proportions. Don't let the beautiful, spectral female figure gracing the cover fool you for too long, this is a harrowing, pummeling affair offering a lot of broken and bruised limbs to those who decide to explore it in the local pit. But let's not sell it short, it is better written than the previous EP and the band are by no means a one trick pony, just as high on creating an atmospheric whole as they are kicking your ass back into the Montana woodlands from which their creative impetus erupted...

...and kick your ass they will, once the morose intro piece passes into the gloom, all octave chords spanned over chugging, a discordant tail chord quickly ceding to the neck breaking rhythms that inaugurate "The Enigma of Fate". Choppy, convoluted thrashing melodies and walls of mesmeric torment characterize the next 5:30 minutes, the band almost decided to leave nothing of you left to experience the rest of the album. I can't say most of the riffs here are individually thrilling, but as a whole they deliver the Martriden experience pretty seriously, and fit flush with the next track, "The Calling", which is nearly as punishing, though slightly more atmospheric, with a fine melodic bridge to it. The two-parter "Ascension" first offers an escalating juggernaut, the most progressive piece on the album thus far, and then a mellow but climbing instrumental second half that becomes quite immersive when the chords begin to charge. Ascension, indeed.

At this point, it's back to the bone breaking, "Processional for the Hellfire Chariot", which opens like a heavier, crushing Testament and then dissolves into a chugging, squealing morass sure to snap any limbs left over from the first few tracks. "The Unsettling Dark" bounces back to calm, its intro segment beautiful and lush with the ringing synthesizers and well constructed clean guitars...this is, of course, not going to last, and within a minute they'll be laying out the biggest smackdown of the album, in which I'd consider my favorite song here. "Prelude" and "A Season in Hell" also deliver the formula tastefully, the former a dreadnought of dementia, the latter eclipsing its big grooves with transcendent keyboard-driven atmospheres and bouncing, curiously thick thrashing fervor. The finale, acoustic instrumental "Immaculate Perception" incorporates some Rachmaninoff into its blissful awakening, like rising from a bad dream.

The Unsettling Dark is more than appropriate as a debut album, building upon the fragments of potential that characterized the EP before it. The individual riffs are better, and it better regulates the balance of brute, storming momentum and periods of frightening calm. Again, Martriden is a very accessible brand of extreme metal, in both the production values and the actual composition. You will not find infinite layers of complexity, much of the material just hammers you up front. That is not to marginalize the proficiency of the band, each player here is taut and excellent, but they rein themselves in far more than, say, your average frenzied West Coast modern USDM band. The album is not short on ambition, even though its individual elements might seem familiar when deconstructed, and thus it is well worth hearing.