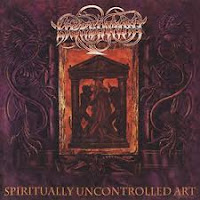 Swedish supergroups are all the norm in this day and age, due to the high profile of a great many metal bands in this country, covering almost all the genre's sub-levels. They are snapped up sight unseen, sounds unheard thanks to their built in audiences. Back in the early 90s, of course, most of Sweden's death metal bands had yet to truly break out, with the exception of Entombed and a handful of others getting decent signings (Grave, Dismember, Unleashed). I'm not sure we can classify Liers in Wait as a 'super' group due to the fact that its members' constituent bands were not yet massive at the time, but in retrospect, the enormous talents that went into this sole EP recording would classify it in that category.

Vocals here are provided by Christofer Johnsson of Therion and Carbonized, who at the time was still using his more ghastly guttural edge as per Of Darkness... or Beyond Sanctorum. He also covers some of the guitar here, joined by Kristian Wåhlin on guitars and keys, also the primary songwriter of this band. You'll know Wåhlin not only from his work in Grotesque or the later Gothic rock of Diabolique, but also his alias, Necrolord, famous Swedish cover artist responsible for legendary albums like Storm of the Light's Bane, In the Nightside Eclipse, Purgatory Afterglow, and so forth. Let's put it this way: the man never ran out of work in those days, and he probably never will if he maintains his consistent quality. Other Liers in Wait included Hans Nilsson of Crystal Age, Dimension Zero and Luciferion, and at one point Tomas Lindberg of At the Gates was in the band, though not for this particular recording.

With such a plethora of involvement, you'd think Spiritually Uncontrolled Art would lie at some vortex, some cross gates between the sounds of these other bands, and to an extent, maybe that is true. But I found that the material actually carried a huge influence from faster USDM bands like Morbid Angel, Deicide and Malevolent Creation, spiced up with some frenetic, cosmic and philosophical atmosphere, lyrics rooted deeply in the Mythos of H.P. Lovecraft. This flailing assault is mostly felt through the more direct blasters like "Overlord" and the band's namesake "Liers in Wait", both credible and competent acts of aggression that shine brightest when they evoke melodic, higher pitched notes or the frenetic leads that cut through like vorpal tentacles from beyond a tear in reality. Often the material is so insanely paced that it seems to crash over itself, resulting in a slight, loose facet to the songwriting.

While those were certainly decent tracks, I found myself more involved with the "Maleficent Dreamvoid", which opens with a cerebral synthesizer of cosmic horror before it too joins the calamitous chaos, a million riffs per minute elevating the frenzied assault, only here the individual guitar lines carry a more curious weight to them. "Bleeding Shrines of Stone" opens with a spliced melodic groove not unlike something the Finns Demilich would write, only given the added benefit of keyboard atmosphere and another burst into the band's overwhelming whirlwind of confusion. The final piece, "Gateways" is an instrumental with some of the finest guitar work on the EP, an extensive use of synthesizers for a doomed atmosphere, and writhing, razor sharp rhythms that slice below the tolling bells.

The production is accurate for its day and reminds me of the first few At the Gates records, or Crystal Age's Far Beyond Divine Horizons, though this is far more brutally inclined. I can only wonder what advances this band would have made had they pursued this band beyond just the one EP, potentially bringing in more of the scenes luminaries for a few full-lengths using this same concept material. Spiritually Controlled Art is 17 minutes, so it won't take you long to flesh out its various threads of insanity, but a fine example of how bands were taking the pure death metal strains of both shores and twisting them into novel formulas. The mix of cosmic, cerebral horror and violent, proficient death metal might not seem so novel anymore, as bands like Mithras, Morbid Angel and others have explored deeply these vacuums of fright beyond comprehension, but Liers in Wait were one of the first to make it stick, albeit briefly. This effort is a good leap short of legendary, but its qualities yearn to be experienced by anyone seeking those dimly glowing gems of 90s potential.