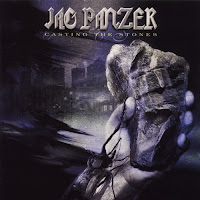 Jag Panzer have made numerous evolutionary leaps through their career, generally kick-started by lineup alterations or the dread of repeating themselves too often, and Casting the Stones is but the latest such paradigm shift, a more complex piece of work than one might have expected in the same year the band and their label would re-issue the lost Chain of Command. This is essentially the album that would upgrade the band to that 'modern' power metal sound, so its not really a surprise to hear some similarities to an Evergrey, Kamelot, Nevermore or Manticora. Casting the Stones has a denser, digitized tone to it which is certainly a far cry from their 80s years, and love it or hate it, this will probably be the side of the band that continues into the future.

My overall impression is that Casting the Stones carries this transition well, but with only a mere few exceptions, I found the material written for this neither bad nor exceptionally good. This is the same lineup the band have used for several albums, and the musicianship is clearly on fire. One needs listen no further than opener "Feast or Famine" to hear how the band have incorporated the use a constantly twisting helix of aggression, atop which they lay out baleful backing vocals to Tyrant's lead line and keyboard condiments. Aside from its general busyness, though, the song is really not that impressive. "The Mission 1943" is glimmering melodic power metal with some similarities to their Mechanized Warfare material, and I found myself drawn to Tyrant's crystal chorus here and the wiry guitar fills, and to the following "Vigilant", which crawls along with bell strikes, excellent melodies and a cautious pace.

Further in we go, and the album really becomes a mix of average, forgettable fare like the brief anthem "Achilles" or the fairly Euro feel of "Legion Immortal", which promises a lot in its spikes of opening melody but doesn't create much of an atmosphere outside of the descending backing vocal patterns; and the more promising muse of "Battered and Bruise", with its rising and descending patterns of progressive shred, or the vampiric, slowly rocking "Cold" with its crests of cautionary melody. "The Hearkening" offers a lot of shine through the technical flow of the guitars and soothing melodies, whereas the closer "Precipice" is almost completely driven by Conklin's inner siren against a fairly dull musical backdrop whose highlight are the Eastern strings and acoustics plucking alongside the softer climes.

Certainly if we are to pick out a Jag Panzer effort with the best technical grasp of its players abilities, we'd have to choose Casting the Stones, because they've upped the amount of technique considerably here over Thane to the Throne or Mechanized Warfare. You'll still hear the same traces of modernity that the band have fostered since their reunion of The Fourth Judgment, and in fact this is album that would end the band's unstoppable productivity. But in the end, it's another 'good' album that never quite roots itself deep enough in the memory like their excellent debut Ample Destruction, and despite the increased performance levels, it feels hollow and charmless like so many modern or futurist power metal albums. It's been six years now since this release, and we can assume when the band finally sums up the drive to offer new material, it will further this direction, but one can only wonder if they've got it in them to ever write songs equivalent to their early highlights.