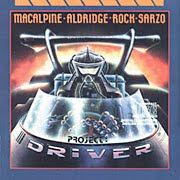 About the worst thing you can accuse the men of M.A.R.S. for would be their miserable fashion sense, sporting a number of glam-fros, elfin glam boots and all manner of castoff 'chic' poseur threads. In this case, 'chic' of course means 'retarded', and even Tony MacAlpine cannot pull off this hairstyle. When posing together, the band look like they're wearing extremely bad wigs, or some sort of fuzzy protection from alien mind probes. They might have just been animal enthusiasts, letting a few critters hibernate on their scalps. It's an image that could scar a man for life, and while I'd be willing its horrid grasp slip free and laugh the band down to oblivion, they did produce this one, decent album called Project: Driver in 1986 that shoves a pair of elfin boots right into my mouth.

It's not a stretch to guess that the acronym M.A.R.S. represents the band members' names, and this is a sort of primordial super grouping of emergent talents from various metal spectra of the 80s. Tony MacAlpine is not only a noted shredder of his own right, but has also performed with others like Vinnie Moore, Joey Tafolla, and more recently the band Ring of Fire. Drummer Tommy Alridge has rather enormous credentials, having performed in Motorhead, Thin Lizzy, and the personal retinues of Ozzy Osbourne and Yngwie J. Malmsteen. Rob Rock is known for fronting his many solo offerings of traditional Christian metal, but he's also fronted a great number of other bands like Driver (related to this, of course), Warrior, Impelliteri, and Axel Rudi Pell. Closing the quartet is bassist Rudy Sarzo of Quiet Riot, Ozzy Osbourne and Dio fame, to list a few.

The Project: Driver album was released through Shrapnel Records in 1986, and the sound had some similarity to other Shrapnel acts like Vicious Rumors, Cacophony, Racer X, and Apocrypha, that being in the thick and hollow tone of the guitars, impressive lead guitar capabilities and melodic vocals. The vocals, in fact, are my favorite part of this album, and perhaps some of the best in Rock's entire career. He's got the perfect mix of soaring power and is very much able to hang on to his cool when he nudges into higher pitched territory. He's also got that commercial appeal that the band are mixing in here with the more serious, fast paced traditional metal, and without his charisma, the record might have been something far less. Listen to him on the cheesy but potent power ballad "You And I", or the wailing "I Can See It In Your Eyes" and you'll get a good impression of his capabilities. Of course, there is also MacAlpine, whose leads pepper the album like whorls of leaves on a brisk, breezy autumn afternoon, occasionally self effacing through excess indulgence, but just as often kicking asses to the moon (they could always climb back via his hair).

Naturally my preference is for the more raging, Shrapnel-worthy fare here like a "Nations on Fire", "Writings on the Wall", and the excellent "Unknown Survivor", but the band also show their chops at more progressive metal material like the ascending "Nostradamus" or dreamy "Slave to My Touch", which burns like hot lead through the chest. If you're seeking cheese, though, these elements also pervade the experience, like the crunchy radio friendly rock of "Fantasy" or the aforementioned progressive power ballad "You And I", which delights despite itself thanks to the scintillating clean guitars and Rob Rock's orbiting melodic gravity. The album is dowsed in thick 80s production values like most of the label's roster, but I personally would not have it any other way; it captured a specific, pre-digital edge that most of the other bands of this period were not yet so fanciful of, and thus the records would stand clear of many peers.

Project: Driver is absolutely worth the pain in tracking down if you enjoy other Shrapnel efforts, in particular the Cacophony pair-up of Jackson Becker and Marty Friedman, or the first two records by Vicious Rumors. It vividly skirts the border between intensity and accessibility, and offers an accurate crossroads of where most of these guys' careers were at in this one moment. You don't need to be some Guitar "whatever" magazine subscriber who hangs out at the local instrument shop far too often for his own sake to appreciate it, since the shredding is far from omnipresent. I'm not sure why the band never recorded a second helping of this material, but my guess is they looked at themselves in the promo shots and then went into hiding for a few years, or the glam-fros wore off and they were abducted by extra-terrestrials at last.