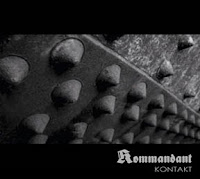 Gas masks have such a natural synchronicity with metal music, both for their relevance to WWII and nuclear warfare in general, so I am rarely surprised to see a band sporting them in promo pics these years. I like the survivalist and anonymous effect they bestow upon some violent, explosive metal crew, and Kommandant fit such an implication fluently with their new EP Kontakt. Boasting a rogues' gallery of current and former members from numerous extreme US underground acts like Blood Coven, Funereal, Forest of Impaled, Cumchrist and Nachtmystium, you can be assured this will not be a walk through a sunny park, flowers in bloom as puppies chase one another round by the tail.

No, this is full on black metal force, about as straightforward as the genre gets within the confines of anti-human warfare, a suitable followup for their 2008 debut Stormlegion, and for added shock value, it was released on 9/11, either to commemorate or relive the tragic events of the World Trade towers in 2001. The band are huge on driving speed, and much of the 20 minutes of the EP blast on by with all the care of a freight train about to cross the boundaries to oblivion, reminiscent of overseas acts like vintage Myrkskog and the more unrelenting artists within the Swedish scene. Kommandant is not huge on riffs: those present may at times feel familiar or derivative, and yet that's not necessarily the impact the band seem intent on. They exist in small numbers, but rarely do they stand out beyond their function as enzymes to the napalm blitzing razor warfare or the full, blood-gouged growling of frontman Nick Hernandez.

The feedback and resonance of "KK66N6ZT" feeds into the blasting "Anti-Human Nemesis", which races past with lightning force, a few simple note patterns attempting to evoke a cycle of misanthropy, but nothing much of interest occurs until the bridge at 1:45, as deeply whispered vocals howl across a more melodic bliss with some subtle thrashing force. "Codex Gigas" carries a more vibrant, melodic sheen, but no less grim in perspective, and this is one of the brightest pieces on the album, as streams of higher pitched chords fuse with this monolithic atmosphere. "Der Maschineraum" creates dense banks of guitars without percussion, soon thundering into the typical blastwork of the band but unfortunately forgettable. "Sulphur Chariot" fares better, with superior rhythms and an almost industrial psychedelic spitfire delivered through the wah wah effects in the bridge, while closer "The Genesis Reactor" crashes through some somewhat memorable, ascending fumes of chaos, again with some of the better riffs here.

Kommandant seem to have an excellent grasp of creating nihilistic atmosphere with solid production values for their genre, and a few of the songs here will certainly get the blood in a rage. Their overall tone and image really mesh well with the intelligent and interesting titles and rhythmic overtures, but not all of the songs threw me into a frenzy, simply because they were lacking standout elements. "Codex Gigas", "Sulphur Chariot" and "The Genesis Reaktor" are worthwhile, with a briefly lasting appeal that should satisfy fans of relentless traditional black metal mixed above the necro basement level, but the other songs did not cut through the wrist, much less to the bone. Still, as proof of concept, I can admit some potential here, and since there are few other bands in our country to perform in this particular strain of nuclear black art, they may one day record something that will kill us all.