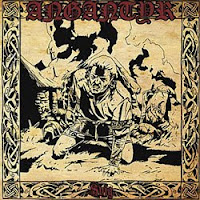 Svig is the fourth full-length effort from Angantyr, the flagship act for the animated Denmark corpse Ynleborgaz, who also moonlights in acts such as Holmgang, Tagefolket and Make a Change...Kill Yourself when he's not busy crafting viking black epics like this one. Previous album Hævn had expanded upon the promise of forebear Sejr, delivering 71 minutes of noisy, cathartic and glorious death rituals for every warrior. It was a savage offering, and overall worth vouching for if you're fond of the style, but if anything, it was also a little long in the teeth, with several compositions wearing out their welcome after repeated plays.

Svig, which I translated to 'evasion' or 'fraud' in Danish, is possibly an attempt to repair its overwrought, elder sibling, focusing in on just six compositions at 48 minutes of music. They still carry on generally between 7-10 minutes, but there are some other changes here that might make this easier to swallow if you found Hævn too much of a burden. The choice of lo-fi, comic book cover art is a curious curve from the grim newsprint of images past, and the sound itself might also reflect this alteration, with warmer tones and far more studio polish than any predecessor. Granted, the level of composition is starkly similar to that of the prior albums, but unlike many necrotic visionaries who might succumb to the bait of 'selling out' when they record their album to sound like anything more than a toilet trip or cold night in the woods, Angantyr actually sounds quite stunning in this environment.

The primary drawback to this or almost any other traditional black or black/Viking metal effort in the 21st century is that the folk-fused glory of the riffing becomes all too predictable in short order, so the listener is left to judge whether or not the feelings and emotions, or lack thereof, inherent to the music are worth hearing such unsurprising patterns. I feel that Svig does fall into this trap more often than not. The riffs are genuine and well intentioned, fluently fixed beneath Ynelborgaz' ripe snarling, and the tempos meander to and fro from faster Bathory Viking material to segues of sodden, overcast glories, then back again, but rarely does a sequence of notes here stand out to your memory or the inevitable test of time. I'm still impressed by this man's ability to put together an entire black metal record himself, perform all instruments and come off as competently as many full 3-5 man acts...

...but the writing is far from perfect, and few moments of the album stand to memory, since he's already produced three solid to great albums in just such a manner. The more vibrant, polished production goes a long way to distinguish Svig from Sejr or Kampen Fortsætter but the longing, shambling Viking corpse rarely deviates from the course. As such, some of the tracks here, like "Svig" itself or the more slowly woven "Skyggespil" do their job, but little more. The work shift is filled, the employee punched in and out on schedule, production kept to the quota, but he won't be earning any bonus for this one. "Raukes Ran" is superior despite its familiar feel and path of certainty. The opening, ascending riff is one hard to embellish upon without losing that sinister, majestic quality, and though the rest of the 9:22 minutes does little to separate itself from the crust of this artist's career, it is well maintained. You can lose yourself here. The same with the closing "Arngrims Armod", opening with the sample of a roiling shore and some galloping acoustics before the electricity arrives, lightning flashing across the broken longship hulls and bloody, beheaded heroes that this man always conjures through this medium.

Svig is yet another of those countless naval battles which is just good enough, hanging at the lower end of your expectations without every truly thrilling you or taking you into some new, unexplored region of the storming seas. There is really nothing exceptional about it, only that it succeeds to plummet along for nearly 50 minutes without boring you. Those who prefer their black metal dried with tradition, never flirting with innovation or ambition, will likely be satisfied, as would anyone who fancied the first three albums, provided they don't mind a bit of cleaning up in the production department. Ironically, there's nothing evasive about this album, it plays its role so passionately and straightforward that it is quickly forgotten, but on a technical level, it might not disappoint the diehard Angantyr berserkers who seek out the same crossgates of early Borknagar, early Enslaved and Viking-era Bathory.