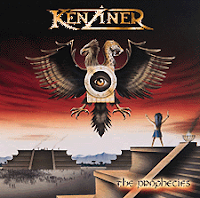 Lighting certainly can strike twice, and in the same place, at least in Finland, where a promising young guitar guru was busy piecing together the sophomore effort of his band Kenziner, which would see increased distribution in a joint maneuver through David Chastain's Leviathan Records and Limb Music in Europe. This time out, Jarno Keskinen has expanded the lineup to a four piece, with Mikko Harkin of Sonata Arctica, Kotipelto and numerous other bands joining here on the keyboards, and Dennis Lesh replaced by cult US drummer Brian Harris of Firewind, Vainglory, Zanister and Darkology. Their presence is clearly felt alongside the budding guitarist and the practiced vocals of Stephen Fredrick, especially as the band can now incorporate Harkin's keyboard shredding alongside Keskinen's solo drills.

Lightning twice over. The Prophecies hits like a storm, a darker and more forceful album than Timescape. The compositions are comparable, but just about everything is turned up a notch, and after teasing you with the piano intro and a faint few seconds of Survivor-like caution, the band erupts into a surge of steadily expanding thunder, "Live Forever", hauling ass across a darkened sky that makes the debut seem...innocent by comparison. Lyrically, the album practices the same generic tropes as the first, well enough written with in the stock 'inspirational' category but rarely evoking a memorable, distinct image. However, you will find yourself very short on concern for this as you hear Keskinen and Harkin dueling off in the bridge, kicking your backside up and down the plateau'd pyramids that adorn the cover art.

"The Razor's Edge" goes in for a little more grace fused to its speed, fragile if potent, scale based fills fleshing out the atmospheric momentum built by Fredrick, Harkin and Harris. "Through the Fire" is another favorite here, slower but sure footed as it steps into serious mode, and "Trail of Tears" fashions an even more steady crawl through its grandiose sense of mystique. Other tracks of note include the shred-off neo-classical instrumental "Dimensions", Fredrick's vocal performance on "Lost in a Fantasy", and of course the closing, 10+ minute epic title track which rises and plummets through nearly the whole range of the album leading up to it. One more I'd point out would be "Eternity", which carefully scales forward with clean picking and vibrant bass lines to another burst of classical infused amusement.

Like Timescape before it, The Prophecies is not much more than a well executed collaboration that rather safely prances about the sanctity of the power/progressive collision used by so many acts from both sides of the Atlantic. This is certainly the better of their two efforts, and sadly the last, as Keskinen would turn his attentions to the separate but similar Virtuocity, who you might also wish to explore if you enjoy Kenziner. It's unlikely to hold much value for anyone beyond the niche core of shred or classical guitar fetishists or ProgPower 'bangers, but it upstages its predecessor and still evokes a level of excitement that betrays the decade plus of dust gathered upon its ascent.