Killswitch Engage - The End of Heartache (2004) 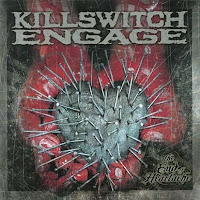 There could be many reasons contributing to Jesse David Leach's exodus from the ranks of Killswitch Engage after their steaming (pile of) sophomore effort Alive or Just Breathing, but the official statement was that he had some health issues which were affecting his ability to perform, and he didn't want to hold the band back. I like to imagine he really just woke up one day, took a good long look in the mirror and realized 'God this band sucks, and I suck with it', but I'm okay with keeping that fantasy to myself. However, considering the massive upswing in the band's popularity due to their high profile tour packages and deal with Roadrunner Records, there was simply no way this band would give it a rest so early in their career. Money was to be made. The sucking was not about to end. Just the heartache...or was it?

So in addition to bringing aboard Justin Foley as a permanent drummer (guitarist and writer Adam Dutkiewicz played the drums on the first two records), the band acquired a new singer in Howard Jones. Jones was in a pretty promising Connecticut metalcore band called Blood Has Been Shed, who on their worst day were far more exciting than anything Killswitch would ever commit to audio, but he had the right look, attitude and vocal hooks for the job. Here on The End of Heartache, he actually expanded his range to include harsh barking similar to Leach, deeper manly Panterrible vocals, and his cleans, which are far more soulful than Leach and thus recall the works of Corey Glover (Living Color), Lajon Witherspoon (Sevendust) and the more obscure Chaka Malik of post-hardcore bands Burn and Orange 9mm. This was at the same time an interesting change for the Massachusetts metalcore godz, and not necessarily a change at all, because Jones' predecessor used a similarly annoying mash of styles, and they work no better over this music with someone else at the microphone.

Yes, The End of Heartache is once again the pits, from the laughable album title and cover image to the weak at the knees lyrics which I cringe to even read. Whatever semblance of political unrest and 'save the world' lameness the band once espoused had now been magnified into high school teen pop lyrics and that would probably have worked on a Pink or Clay Aiken CD just as much as they function on a metalcore effort, that is when they're not heralds of generational 'rebirth' like the Left Behind of hardcore. But it's not just the lyrics that suck, it's the overall sterilization of the band's sound into a far-too polished pop medium. The vocals have so little impact here as they shift from a growl to a hammy soul line and back again with such awkward delivery that by comparison a Sister of God would be less shocked by a King Diamond record on her first play through.

From the first, roaring disappointment of "A Bid Farewell" you know exactly what you are about to suffer. A series of rolling, mosh riffs that took about as much effort to write as plugging in a guitar part to Jones' manly climb towards the radio friendly, emotional chorus, and a surge of melodic death lite that sounds like it was licensed directly from the band's Swedish influences. Around 2:30 the band even breaks out a fucking Pantera style groove that instantly dissolves any ability to take the album seriously, so obvious is it reaching into its own asshole to mock itself and you, the listener. "Take This Oath" merges more grooves with some fairly straight melodic death/thrash plucking, the latter of which might be acceptable without the shit sandwich surroundings it is tucked between. "When Darkness Falls" is one of the better regarded tracks on the album, and it starts with about 10 seconds of furious potential before it goes into some Lamb of God groove rhythm, complete with annoying guitar squeals and metalcore vocal cruise mode which often recalls unsuccessfully the great Rob of 108.

"Rose of Sharyn" is another pretty straight of pedestrian Gothencore and generic, escalating note sequence which reminds me of a punk band like Good Charlotte. Oh, so uplifting I just want to scream Jesus into the sky, born again to a happy world of bouncy metalcore that even my kid sister can swoon to in Teen Beat magazine. Next is the country/folk instrumental "Inhale" which is entirely worthless. There's another interlude called "And Embers Rise" deeper in the album which is actually the sole highlight of the record, as its a glistening wall of acoustics (something In Flames might also do) with a slight post-rock atmosphere. But you'll find no other such solace on this effort, it's all meat headed LCD obsessed poppy metalcore with big chorus parts and bad mosh parts. Try not to have your stomach knot as you listen through "Take This Oath" or the big tease "Wasted Sacrifice" which sounds like youth core is about to erupt before the hideous slam pit nu-grooves erupt, or "Breathe Life" which throws away a completely reasonable modern melodic thrash/death riff so that it can rock out with generichugging stupidity.

Riff for riff, I'll give this album a slight edge over its predecessor Alive or Just Breathing, but it still doesn't even border on tolerable. How a farce like this prospers in the country at large while hundreds of excellent US metal bands sink even deeper into obscure hopelessness is a mere testament to the poor taste of the masses, and I refuse to buy into it. Clean out your fucking ears for a moment, or better let, floss them with barbwire and vintage Razor records, and see the forest for the trees, you apathetic swine. The End of Heartache is more like the Persistence of a Headache, so fragmented and pathetic that I'd rather listen to Justin Bieber lipsync Jonas Brothers covers for the 40 minutes here that do not include "And Embers Rise".