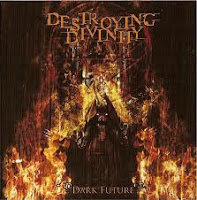 Novelty within the realm of death metal is something sadly confined to the past, as least in most cases. Once in awhile you've got a Portal arriving, or The Chasm will continue to refine themselves and the atmospheric potential of their medium, but for most artists who have arrived this century to swell out the genre's ranks, the playground has already been trampled many times over, the sand scattered outside the box and the toys worn and broken with overuse. Thus it becomes a matter of survival: do you honor your genre or do you disappoint it? Czechs Destroying Divinity answer with the former. Surely, there is nothing unique about their third full-length plunge Dark Future. Even the title is the opposite of oblique. However, the music itself is lovingly crafted enough that you can feel the stomach begin to drop out at the menacing walls of low-pitched guitars and the glistening guts of atmosphere created through the wicked fills.

I am at times reminded of Morbid Angel's slower material (Domination, Heretic or Gateways to Annihilation) in a slugfest with the strange taste of Finland's Demilich, the relentless true crop of Dutch death outfits like Sinister or Pestilence, and a smaller dose of an Immolation or Incantation in the way they conceive their brickhouse, sinister grooves. The weighted, melodic density that introduces "Birth of Faceless Killer" even ventures into some mid 90s Hypocrisy territory, but overall the Czech band does not sound so much like any one influence to become a slack-jawed example of icon worship or impersonation, and the record does maintain a fresh polish, thanks to the simmering, acidic melodies that burst and bleed over the brutal slamming delivery of the rhythm guitars and vocals, which are predictable in the guttural sense, but truly effective over this level of composition.

The band excels in the slower area, as in tracks "Undead in the Darkness" or "At War With Two Worlds". The latter stands out in particular due to the almost industrial strength mystique caused by the clinical glow of the melodies, the simplicity of the bluesy, evil lead in the early bridge, or the extended meathouse hooking of the breakdown. They hint at a rare crossroads of old school appeal, convulsive mosh pit entitlement, and a modern glaze of mortuary aesthetics. But Destroying Divinity do not limit themselves solely to the corpse-crawl of morbid intentions, picking up the pace with the hostile juggernaut "Prophecy" or the desperate writhing slaughterhouse found beneath the visceral awnings of "Name Written With Blood".

There's not a track among these nine that will lead you astray from the experience, and while you may find the resonance of atmosphere redundant in places, Dark Future delivers where many peers simply fail due to the lack of virile energy and vile intentions, rendering the fat of the band's earlier albums on Grodshain Productions into the slosh of weak oil. An unsettling darkness thrives at the core of this album, a roiling, otherworldly chaos which speaks of ill fates to come. It's not a riff for riff masterpiece, but 36 minutes of well executed tumult well fitted to a zombie infestation or ritual summoning of Elder gods.