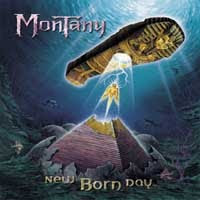 The uproar of melodic European power metal in the late 90s and on into the 21st century was riding on the back of the genre's most popular acts at that time, namely HammerFall, Helloween, Blind Guardian, Primal Fear, Running Wild, Gamma Ray, and Rhapsody, and sadly most of the passengers were naught more than disposable garbage, including the wealth of the bands out of Italy and a load of the German hangers on. Into this mix we cast the band Montany, who despite a very long history (begun in the late 80s) were unable to produce anything of merit until the turn of the 21st century, when their demo Evermore arrived. There were not a lot of Dutch bands astride this wave, so the band's nationality alone was a point of minor interest.

Their skills were tight enough to land them a deal with Limb Music, one of the forerunners in melodic power/progressive metal the world wide, and with New Born Day we got a reasonable effort that was simply not standout enough to stir up the checkbooks and ATM cards of those well into debt with the band's more famous contemporaries. That's not to say there is not a considerable amount of effort here, but I feel it falls squarely on the shoulders of the guitars. The vocalist has a silky and somewhat seductive tone, but not so smooth as say, Andi Deris of Helloween. When the higher ranges are explored, the vocals seem to drift off, losing power at a rapid rate, so he's forced to spit some acid into his mid range, and this is where he seems to fit perfectly. As I mentioned, though, it is the guitars that truly explode off this record, with thick and constant rhythms chugging along below the synthesizer tones, often cut apart by wells of rich melodic rain that mesh in well with the refreshing atmosphere.

The material is highly accessible, like a HammerFall with a touch of 80s hard rock radio nostalgia provoked through the far out of date synthesizer pads, but really the influence is taken from the same source as any other power metal band of this period. Standout tracks include "New Born Day" for the incorruptible, enthusiastic energy of its chorus; "Here in the Light" for the catchy 'whoah oh' backing vocals in its own chorus; "Pyramid of Cheops", which made it here from the demo, a more moody, elegant and progressive piece with a good balance of dense, heavy guitars and mid-paced momentum; and a few more tracks like "Sentenced" and "Deep Water Rising", which remind one of Gamma Ray's output from a few years prior. Despite their similarities to a wide range of peers, though, Montany deserve a little credit for never sounding too much like any one in particular, though individual tracks differ in their level of tribute. "Back from the Sky" sounds very similar to Helloween, Freedom Call, etc, while the riffing on "Higher and Higher" would fit in directly with a Glory to the Brave.

If the pumping heart of the sub-genre suits you, and you don't find yourself pining for anything more than a stock, melodic chorus and some uplifting guitars, New Born Day is probably enough to satisfy your cravings. It sounds professional, the songs almost all tend towards well written, or at least well enough written to survive a brush with mediocrity, and the band is well practiced, though the guitars tend to spasm over everything, occasionally leaving the rhythm section and even the keyboards in their dust. Several things could be better: the vocals, the character of the riffs being the foremost. It's good enough, and a strong enough foundation to build upon, but unfortunately the band split after this release, the flying sarcophagus coming to a halt in some distant galaxy, perhaps never to return...unless their recent reformation and gigging decides otherwise.