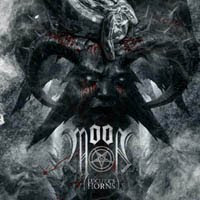 Moon is a Polish black metal act that produced two albums in the late 90s of intermediary quality, Daemon's Heart and Satan's Wept, after which the band broke up. A decade later, in the year 2009, the sole original member, Cezar, who has also spent most of his time in Christ Agony (and its alternate incarnation Union), decided to recruit about 3/5ths of the band Abusiveness to assist in a new release, Lucifer's Horns. And yes, before you ask, all of their album titles have two words with the same possessive apostrophe, including the recent double reissue, Devil's Return, which combined with this latest effort could send Moon hurtling into the radars of the black metal faction who largely ignored them in the first place.

Tonally, Lucifer's Horns picks up right where Satan's Wept left us, stranded in the hopeless embrace of the devil, but with a thicker, almost grinding process to the guitars. Some degree of melody and symphonic infusion has been forsaken on this new record for a more crushing, overall approach, but otherwise Cezar is easily recognized as his former self, with his frothing, nearly over the top vocals, and the characteristic thrust of the percussion, which is as polished as a well oiled machine of death as it carves through its livestock. The lyrics and titles continue to explore the pretty sadistic and sexual side of the occult, which by this point feels so redundant that Satan himself must have grown weary and bored of such exaltation, but certainly you have "The Semen of Ye Old One", "Night of the Serpent" and "Torches Begin to Burn" which stoke a fire in the bloodstream for a gruesome interpretation of the fallen angel's litanies and rituals.

The intro piece, "Summoning of Natan", is a brief, slowly rolling mosh menace graced with diabolic, ringing notation, soon blown into excrement by the treacherous and driving title track. Here you will immediately take in the beautiful crunch of the guitars, which played at this level of frenzy creates a grinding/death metal edge to the sound which you don't tend to hear in most of the traditional acts of this genre. The barrage is maintained through almost the entire 42 minutes of the effort, with standout tracks including the coiling crush of "Night of the Serpent", the hammered pulse of "The Book of Fire" and the ghastly closure of "Summoning of Demons", though it's not the last track on the album. The band have reserved that slot for a re-recording of "Daemon's Heart", which fits in well, abyssal fangs dripping hellish venom as they complete a 'cycle' back to the band's past.

Sonically, there is no question that the band is a force to be reckoned with. The slight touches of synthesizers and bells to create a heightened mood are truly in the backseat here as the new Moon is focused heavily on its brutal, Satanic stampede. As for its brickhouse guitar work and overall production values, it stands alongside most of the modern standards. The riffs are unfortunately not written with an interesting variety, but thanks to that thick, spewing tone they still offer enough value that fans of the 90s albums should not experience disappointment. With such a massive black metal landscape having developed in the interceding decade, I'm not sure how much impact Lucifer's Horns is bound to create. There are simply far more compelling records with which to spend your time and coin, but Cezar has assembled a solid lineup here and a dedicated effort that might in fact appeal to adherents to the ballistic side of the spectrum.