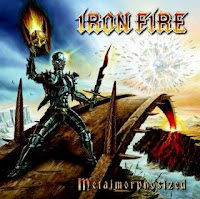 I don't know what it is with all the power and traditional metal bands lately, incorporating 'metal' into the album titles. Gamma Ray drops To the Metal. Halford is Made of Metal. Helloween's new single asks "Are You Metal?" Is this some poignant statement? Is it necessary for the kiddies, so they don't mistake this shit for rap music? Or is it just pure laziness? I'm going to lean towards that last option. At any rate, Iron Fire is the latest to jump aboard this sad wave of album title faux pas, with Metalmorphosized, their sixth full length. Arriving at the rise of power metal's popularity in the turn of the century with a debut reminiscent of Running Wild, I don't think there are many who thought the Danish group would survive once the wave broke.

This is primarily due to the voice of Martin Steene, of course, who has quite a set of pipes, but delivers his melodic lines in such nasal force that they often prove more humorous than serious, though the lyrics are anything but the former. Still, Iron Fire have occasionally produced a worthwhile effort in the past decade, such as last year's To the Grave, and Steene's qualified enough that one can just get used to him. Metalmorphosized is a sort of special occasion, a 10 year anniversary since their Thunderstorm debut, so the band have brought back a lot of their former members to guest on tracks. The songs themselves are a mix of new compositions and tracks from the band's career gap between On the Edge (2001) and Revenge (2006), so it is arguably a clean sweep of the stables as much as a novel representation of the band.

The trademarks of German power metal anthems are all present in Iron Fire's sound, with a slight twist of the Finnish scene ala Stratovarius or Sonata Arctica. Steene likes to mix in melodic death grunts or blackish rasps into his more typical, high pitched fare, and this can often create a disconcerted effect which might be functioning as intended. For example, in "The Underworld" they serves as a distraction, where this would otherwise have been an upbeat, excellent track (taken from the band's 2003 demo). In the opener "Reborn to Darkness", the heavier, crushing tones of the riffing, futuristic spin on the synths, and the immediate use of the melodic death vocals tricked me into thinking the band had shifted to a Soilwork style, but soon enough Steene switches into his highs and you're left with a bizarre mix of the two. Normally I'm not opposed to power metal bands incorporating outside influences, since the formula is so rarely deviated from, but I'm not sure I was welcoming of this here.

Still, the majority of tracks here play it safe, like the charging "Back in the Fire", the graceful and grooving "Nightmare", and the ripping glory of "Left for Dead". "Drowning in Blood" and "The Graveyard" are both decent anthems, and the closing "Phantom Symphony" shifts through a number of aggressive and ballad-like segments in its 10 minutes of existence. "Riding Through Hell" takes the band's Running Wild influence to an appreciable level of aggression, and this was perhaps my single favorite track on the album. Unfortunately, aside from this and a few other moments, Metalmorphosized is neither as memorable as its predecessor (which just barely made muster), or much of a standout among superior efforts in the genre.

The mix is great, the riffs heavy, and nothing truly offensive present unless the harsh vocals will turn off the power purist, but as sugary as the songs are written, they feel like the last satisfying pack of bubble gum you purchased. Cheap thrills that last only briefly before they blow up and you spit them into the garbage can. Iron Fire can write a chorus or a solo, or incorporate a thicker grooving tone to the bottom end, but all this is moot when I have no desire to instantly skip back to replay a track, and I found no such inspiration here even after a few complete playthroughs.