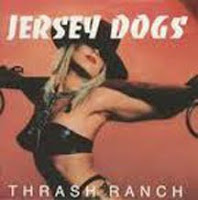 Apparently the Jersey Dogs were able to make a worthwhile enough impression with their Don't Worry, Get Angry! EP during the thrash metal gold rush, because they were snapped up by the ill fated Grudge Records imprint of BGM to produce a full-length in 1990 called Thrash Ranch. Accordingly, the Dogs would improve upon not only their musical ambition, but also their choice in cover art, because we are now allowed to salivate over a leather adorned, wide-brim hat rocking blond instead of staring at Mother Earth down the ugly rim of a porcelain god. In the end, these small advancements would not be enough to catapult this quartet out of the pits of obscurity, because their label soon folded, leaving them in the dust, and for fuck's sake, they were still sporting that terrible logo font! You're in New Jersey, boys, couldn't you at least tip a graffiti artist to come up with something superior?

It is almost but not quite a shame that the Jersey Dogs were unable to further their impact, because there are some rather promising ideas present on Thrash Ranch that with further gestation could have paid off in the long run. There's a huge increase in melodic, progressive guitar work on this album, to offset the brute thrashing rhythms. The presence of the bass here is far more important than on the preceding EP, popping and plodding below the tightened, almost too polished guitar fare. This is most noted on the tracks from the EP, all of which are incorporated into this full-length, and I'm not sure the new recordings are necessarily superior to the earlier incarnations, they feel somewhat castrated here. There are a number of tracks without vocals, like the opener "Posse of Doom", which begins with a Wild West ambiance and then proceeds through a number of simplistic, mosh rhythms that would frankly become more potent with the added layer of vocals. I realize this is in the tradition of bands like Sacred Reich or S.O.D. "March of the S.O.D.", but it feels a little bleak to introduce the record with 4+ minutes of scarce ideas.

However, even the "Posse" is a positive decision when compared to the funk instrumental that for some reason darkens the record's 8th track slot. "Greasy Funk Chicken" is indeed greasy, a funk/jazz piece that would be better saved for the band's Friday night improv jam outfit than placed upon a metal album as some sort of proof that the band are open minded. Funk has a time and place, called the funk band, where it is appropriate, and to be fair, this piece is not so embarrassing as the preachy and retarded "31 Flavors" by Sacred Reich, or anything by the UK band Ignorance or the Suicidal Tendencies side project Infectious Grooves. There are some metal leads that break out over the mesh of experimentation, but it still leaves a lame and bitter aftertaste.

As for the remainder of the record, we are granted five new originals that show much of the potential that I had mentioned earlier. "Medicine Man" has some loud, popping bass (not quite funky enough to be funk) and raging rhythms, with Ciarlo's vocals sounding once more like some approximation of Sacred Reich's Phil Rind and Xentrix's Chris Astley. This is the standard, moshing fare we would have expected from Jersey Dogs coming off their EP, but there's an even louder ratio of crunch to the bass. "Why Is" uses faster, speed/thrash rhythms that groove along to the beat while the band layers in gang vocals for street credibility. But the best of the bunch would be the chugging onslaught of "Blood from a Stone" and the frenetic and clinical tech thrash guitars that spit their way through "Last Breath", which is quite possibly the best song in the band's entire discography, despite a fairly dull vocal pattern. "Games" is moored down by some bombastic, forgettable grooves and a mix of conversational, mumbled vocals and Ciarlo's normal bark, but the lead is reasonable in a Rocky George kinda way.

Thrash Ranch is not something I'd rank high on any list of recommendations, not even for urban NY/NJ thrash metal from the same period. You would do better with the later Gothic Slam Just a Face in the Crowd, which features a very similar style with better songs and riffs. It's not that this is truly bad with the exception of the funk/thrash instrumental, but when held against the standards of the day like Rust in Peace, Alice in Hell or even Handle With Care, it seems too juvenile for much of its playtime ("Last Breath" being a noted exception). The band would later reconnect with Attacker, who are far more interesting, but at the very least, Thrash Ranch serves as an entertaining, obscure footnote of polished mediocrity.