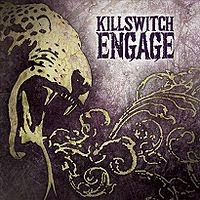 It's ironic that the least bad tattoo looking logo the band have ever graced upon an album cover is accompanied by artwork that, well, seems like a pretty bad tattoo design waiting to happen, but I suppose the appeal of the band has always been towards the disenfranchised urbanite who spends inordinate amounts of time hanging at the local parlor, planning out the next inking. But then, no one has ever accused this group of ever having quality covers, opting for a minimalism that can cultivate the 'emotions' of their music.

In naming their latest record Killswitch Engage (again), I can only assume that this was supposed to be some poignant return to form. In reality, it's the same band you've heard on the past three albums. The production retains a proper degree of top shelf, pop polish that gimps the cutting edge of the guitars, but compensating in the overall clarity of the music. The lyrics and song titles are about as potent as you might expect from any faceless, random country or pop star of the 21st century: "Take Me Away", "Never Again", "Starting Over", "Save Me", "This is Goodbye", and "I Would Do Anything". Zero credit or effort expended there, but I will admit that this has a higher per capita assortment of decent riffs than anything the band have previously put out. It was bound to happen, once the band had settled into their mold, that they'd happen upon the appropriate glint of melody, and if you can pop a chubby for a band who combines In Flames, Sevendust and Atreyu, then this album might be the appropriate gateway for your quest into bad taste.

Tracks like "A Light in a Darkened World", "Take Me Away", and especially "This is Goodbye" show some potential in their writing, jubilant splurges of jiffy clean, refined riffs that too quickly go the route of extinction as the band feels compelled to insert their shitty soul vocals in predictable fashion. In fact, "This is Goodbye" might just have the best riffs of any Killswitch Engage song I've ever heard, and from :30 seconds in to about :60 I was nearly in heaven, but then the band immediately lurches into a shoddy, mediocre chugging mosh riff! Holy coitus interruptus Batman. These are the poor decisions which plague Killswitch Engage, and really, the band's entire career, and once the teenyboppers have all moved on to their next Avenged Sevenfold album, they'll have forgotten all about this disposable shitfit.

Of course, several of the songs are just downright bad, like "Save Me" and its awful Phil Anselmo wannabe vocals over poppy, plunking melodies, or "I Would Do Anything" with its brilliant lyrical scheme:

Are we listening to Destiny's Child, or a metalcore band? There were many moments on this album where I completely forgot the distinction, this is such an exercise in commercial comfort. It's nearly impossible to take seriously, for every trace of potential is stamped out almost instantly like a clever serial killer stamping out the tracks of his victims to elude the authorities. The bonus live tracks exhibit a band who sounds pristine on the stage, but when you hear the "Let me hear the girls, let me hear the guys" that introduces the shitty song "My Curse", followed by Panterrible screams, and the even more awkward backing vocals deeper into the performance, worse by far than Howard himself, and the later 'douchebag' antics, then what else do I have to tell you? It's unlikely that the live rendition of their 'jump da fuc up' Dio cover is likely to alter the perception, and a Jerry Springer quote to close the performance? That speaks volumes.

This is not a band to take seriously, and not a band that takes themselves seriously. A diet of worms. For worms. A sellout from the very start. You can lead me to metalcore, I might even drink in a few of the more interesting acts. I've always had a fondness for certain elements of the genre, but I am simply unable to pick up what this band is putting down, and they are simply one of the worst and most embarrassing acts of their ilk in all the world. I would rather face A Clockwork Orange situation in which I was strapped to a chair, eyes splayed open, forced to watch American Idol with all the contestants lip syncing Lamb of God songs than spend another wasted minute with this grossly overrated sack of sheep guts.