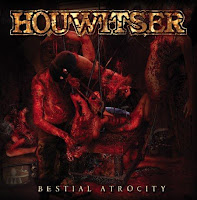 The Dutch Houwitser had taken some time off from us after their previous full-length Damage Assessment in 2003, but last year they knocked out the Sledgehammer Redemption EP and all seemed to be on course for another primal pummeling of pure death warfare, persisting in the 'faster' Bolt Thrower meets Sinister or Deicide aesthetics that defined so many of their prior records like Embrace Damnation and Rage Inside the Womb, which are absolutely worth a listen if you're a fan of old school brutality with the energy turned up and artillery placed primarily in offensive positions. Sadly, this new album Bestial Atrocity does little more than maintain a status quo, as bombshell flack comes flying, guitars grind and gun across a mostly blasted landscape that has been blasted out far too many times in the past.

This is a band with extensive experience of course, having shared members with Sinister, Thanatos, Altar and others, and thus the amount of hammering here is balanced with tight musicianship and absolutely no fucking around whatsoever. The band have scattered around some samples of convicted hitman Richard "The Iceman" Kusklinski for a grim, added effect, and they're sufficient motivators to begin immediate headbanging through tracks like "Devoured Cunt" or "Hatred Vindicated", both entertaining for a few spins but ultimately lacking in the riffage required to mandate the transfer of currency. "Sledgehammer Redemption" is also found here, so the album essentially includes that full EP, and the song is half-decent: warlike riffs with sporadic lead bursts and truly punishing, grooving verse rhythms leading up into emergent octave chords in the bridge.

Elsewhere, apart from the occasional attention grabbing riff found in, say, the bridge of "Lynch the Cancer" or the 8+ minute closer "Demolish the Deformed", there's simply nothing here to really become excited over, and the attention span is too soon halted. As a functional score to a bone grinding facility, Bestial Atrocity carries its weight with no apologies, no indulgent spasms of technicality, and no desire or ambition besides a neck breaking. But it evokes very little of the true ghastly menace that haunts the very best old school death metal records, or the dizzying virtuosity of the better modern artists in the genre, and simply settles for a median approach. The material is uniformly solid but forgettable. Individual riff patterns might get the feet to moshing, and Stan Blonk's vocals could certainly churn butter or scare your girlfriend, but there is simply not much compulsion for further listening, when so many better albums of its sort already exist.