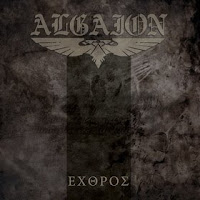 Algaion have now been around for quite some time, nearing 20 years, in which they've only produced three full-length efforts and a few EPs. In fact, since the sophomore offering General Enmity, it has now been 13 years. To be fair, the band have never really broken up in this time, they simply have other projects they've all worked with, and Algaion itself is a tasteful endeavor which will simply manifest when the core duo of Mårten Björkman and Mathias Kamijo feel like they've actually got something to write about. If more bands had this attitude, well perhaps we'd be less knee deep in shit, and only ankle deep, but I suppose concessions must be made for those wishing to use their music to put food on the table.

Nevertheless, each manifestation of this Swedish mainstay has arrived with a new evolution of sound, tracing its core back through their early 90s demos and debut album. Speaking of which, Oimai Algeiou is a favorite of mine among cult Swedish black metal releases, an incredibly vicious affair with disgusting levels of vitriolic vocals meshed with an amazing atmosphere. But there is no doubt that the band have held melody as an integral component of their compositions, and even in those savage, halcyon times, the band could conjure something beautiful. So, despite Exthros being less of a traditional black metal record and more of an interesting, melodic black/death curiosity, it is by no means a surprise that they are heavily focused on mesmerizing the listener through the guitar patterns, a feat which they more or less succeed in here.

I am most reminded of the more recent efforts from Rotting Christ, which use galloping or charging blast beats with choppy, hammering guitar patterns. It's a little ironic, since Exthros contains a cover of "Sign of Evil Existence", from back when Rotting Christ sounded quite different. This inherent influence is felt in "Theos Tou Aimatos" and "Nature Our Slave", both of which pound pretty hard, the melodic infusions like nails shoved uncomfortably into the ear drums of the surprised listener. Tunes like "We Are the Enemy" take this style even further, so directly and intent that you feel the drummer is about to fall off his kit, every string in the band about to snap as each rhythm persists in pounding your head. Robert Eng (Corporation 187, Satanic Slaughter, etc) is like a tightly wound cobra here, constantly striking a different target with each flick of the wrist and ankle.

Thankfully, the pace is changed often enough that the technique never becomes a complete headache: "The Last of Cursed Days" straddles a middle pace, Björkman's vocals conjuring up some of the band's early years, and "This is Our Temple" another graceful departure which should satisfy any fan of thriving, desperate melodic death/thrash (or black) metal. "House of War" has a similar sadness in the intro, with a fine swagger to its verse riffing. The Rotting Christ cover, "The Sign of Evil Existence" is taken from Thy Mighty Contract album (1993), and wedged together with another Greek classic cover, "The Era of Satan Rising" via Thou Art Lord. Both are tidily performed in just over three minutes, and they fit in rather well with the current style Algaion have extracted from their brains here.

Exthros has its qualities, and it's largely a pleasant listen if you don't mind the melodic nature being driven through your mind like a piton that the band is scaling up some windswept mountain wall. However, it hasn't had the same effect on me as the disturbing debut or its more melodic, glorious thrashing and rocking successor General Enmity. That said, it's still worth a listen, whether you appreciate Algaion of years past or you fancy Rotting Christ's recent catalog (Khronos, Genesis, Theogonia, etc.), and I'm glad they haven't forgotten about this band in the intervening years since they last spoke out.