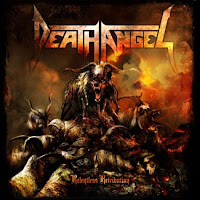 First I should state that there is but one Death Angel album I find essential in the band's history, and that would be the debut The Ultra-Violence, a brash and savage effort that was impressive if one considers the age of the band at that time and their comparative quality to other acts of 1987. Frolic Through the Park and Act III were both interesting efforts, with a small handful of memorable tunes, but they simply do not stand up to the 'seemingly' endless decades that have since transpired. As for the ensuing, 'reunion' albums The Art of Dying and Killing Season, those quickly went in one ear and out with others. Its clear the band took their time writing these records, as opposed to their intervening and awful projects The Organization and Swarm, but there was a clear dearth of headbanging might and almost all of the band's feral tendencies from the 80s were long past castration.

It is with great surprise that I find Relentless Retribution to my liking. Not because it's a Death Angel effort, because aside from a few vague similarities in surging rhythms and a blend of viciousness and melody that might have been characteristic of Act III or The Art of Dying, it doesn't much sound like the band's earlier years. No, this is a good album simply because of its careful composition, a modern thrash effort which knows when to expand into accessible chorus territory and when to simply flatten you with polished, hammering rhythms. No, you will not find "Mistress of Pain", "Voracious Souls" or "Evil Priest" level mayhem here. The band is still exploring the balance of thrash and acoustic, calm geography that it's been advocating since Act III, in particular through tracks like "Claws in So Deep", which has a lush sequence of acoustic guitars, or the late track "Volcanic" which is a fluid experiment in "Planet Caravan" like angst.

However, so much of this material is positively enforced, head banging fury that we can perhaps forgive the band for having their heads in the clouds for these many years. "River of Rapture" is truly vicious, with Mark Osequeda channeling a little Schmier into his youthful fervor for a powerful blend of melodic chugging and brute, grooving chords, with spry leads twining through. "Truce" will also hit you like a fist to the gut, balanced and intricate notation rifling over a peculiar and venomous verse delivery where the bass is featured loudly and the vocals get all tough and splattered."This Hate" seems scattershot between roots thrashing, grooves and an infusion of accessible melody, but its nonetheless effective, and even the more rock influenced fare like "Death of the Meek" and "Opponents at Side" feel as if they've something to offer the more open-minded fan of the heavier end of mainstream rock ala Alice in Chains, Skid Row etc.

Relentless Retribution is not pure thrash metal, not by any means, and its expansive nature might find the jaded and loyalist fan of the band's first two records twirling his/her ears in utter confusion or frustration, but as a whole piece of work, it delivered approximately 45 minutes of enjoyment and another 11 minutes that I might toss out ("Into the Arms of Righteous Anger" and "Volcanic" did not exactly tickle me) if given the choice. DO NOT expect raw and virulent 80s thrash metal when you listen through this, it is clear the band have abandoned that long ago to develop themselves into sounds that incorporate the groove metal of the 90s and the outside influence of rock and roll, grunge and other formats. Death Angel are never going to release The Ultra-Violence 2.0, and they will never top that debut. So take this for what it is, not what it lacks, and you might just be entertained more than you would have thought possible from this inconsistent but persistent unit.