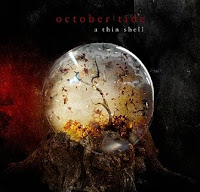 13 years have passed since October Tide's monumental melodic death/doom debut Rain Without End, and in the interim, the duo of Jonas Renkse and Fredrik Norrman have gone on to a huge career with their primary band Katatonia. Ironically, Norrman and his brother just quit in the winter of 2009, after the release of the excellent Night is the New Day, so decided to focus his efforts on getting this band back on its feet from its decade long slumber. Of course, he'll be doing it without Jonas Renkse this time, who remains in Katatonia. Nor is he doing this with Mårten Hansen, who replaced Jonas for the barely passable sophomore Grey Dawn in 1999.

Actually, the entire lineup, with the exception of Fredrik Norrman, is new to October Tide, if not new to the Swedish scene in general. Tobias Netzell of In Mourning handles the growling, and does a pretty smash up job of it, channeling the deep and full grunts of Renkse on the debut. Drummer Robin Bergh has been brought over from Amaran, Emil Alstermark on the second guitar, and session bass for A Thin Shell is provided by Jonas Kjellgren of Scar Symmetry, Centinex, and several other noted Swedish bands. Thankfully, the band heads straight back to the source of their initial momentum, the slow paced, beautiful melodies of Rain Without End. Grey Dawn, which was not a terrible album, but a dive down in quality, is ignored completely. This is to the band's advantage, as that sophomore was not held in very esteem, and if October Tide is bent on becoming a full time act as opposed to its initial Katatonia side project status, they should be providing their best doomed leg forward.

Like the debut, there are but seven compositions here, and all are solid, though I've developed a preference for the latter half of the album. "A Custodian of Science" comes out gunning with the unmovable chords and sailing melodies of Rain Without End, as if an apology for those years of absence, but it never quite develops any truly sticking riffs. Nevertheless, it's a tasteful balance of calm, clean guitars and roiling bass with crashing walls of melody, and certainly true to the band's M.O. "Deplorable Request" saunters along even more slowly, descending lines tailing off in the blunt chords, a little chugging for heaviness and a warmth in the note selection that merges well with Netzell's growling, joined here by a second, snarling vocal. "The Nighttime Project" is mellow and frightening, the best track up to this point, an instrumental with some memorable guitar lines that leads into the lurching "Blackness Devours", which surprisingly seems to have a little bit of stoner doom shoved into its lead-in groove.

Deeper still, "The Diving Line" provides a crash course in what made a Rain Without End or Katatonia's Brave Murder Day so divine, pretty much the perfect selection of notes, distant, echoed melodies dancing off against the elegance and power, and I adore the bridge riff here as it transforms from beautiful to eerie. "Fragile" returns to a lurching gait, but the chords are captivating, the leads just icing on the cake as it picks up to majestic, crashing heights, Netzell the very match of Renkse on the debut, if not better. "Scorned" closes the album as its most moody offering, guitars transforms sparse sheens of sonic, depressive rain while the beat rocks off minimally into the depth of ages, as if your lens were being slowly pulled away from the glass autumn globe on the cover as the winds of time begin to erase all happiness. Not the best song here, but a fitting finale to a fairly impressive return to form.

A Thin Shell allows us to forget the past decade, and perhaps even to forget Grey Dawn, because it's the natural sequel to Rain Without End that a lot of fans likely desired. It's certainly not as riffy as that debut, or rather, the guitars are not quite so strong, but the wonderful production creates a new depth to the procession which makes it emotionally potent. I often find myself drifting off to a lot of the melodic death/doom acts, and not in a good way. The same can be said for certain moments of this album, perhaps a part of "Scorned" or "Blackness Devours", but the rest serves as an attention holding lamentation. "The Nighttime Project", "The Dividing Line" and "Fragile" are the only true standouts, but as a whole it does not disappoint those who have been patient for its arrival.